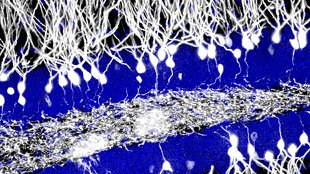 New neurons (white) integrating into hippocampus.JASON SNYDERAdult mice that exercised on a running wheel after experiencing an event were more likely than their inactive mates to forget the experience, according to a paper from researchers at the University of Toronto, published in Science today (May 8). The results suggest that the production of new neurons—neurogenesis—prompted by the exercise wiped out the mice’s memories. They might also explain why human infants, whose brains exhibit abundant neurogenesis, do not have long-term memories.

“In general, hippocampal neurogenesis has been thought to be the basis for memory and they’re suggesting that it’s the basis for amnesia,” said Thomas Insel, director of the National Institute of Mental Health. “That’s a very controversial and provocative concept.”

Infantile amnesia is common to all humans. Children typically do not develop long-term memories until age three or four. But why is that? Sheena Josselyn and her...

More specifically, they wondered whether it might have something to do with neurogenesis in the hippocampus—a brain region involved in learning and memory. Hippocampal neurons are produced rapidly during infancy, but neuronal generation in the region slows to a trickle in adulthood. “This inverse relationship between the levels of neurogenesis and the ability to form a long-term memory got us thinking that maybe one is due to the other,” said Josselyn.

Running is known to boost neurogenesis in mice. So, to test whether neurogenesis might impair memory, Josselyn and Frankland first taught mice to fear a particular environment—the researchers placed the animals in a distinctive box and gave them electric shocks—and then provided them with access to a running wheel or let them remain sedentary. When the mice were returned to the box after a day or a week, both groups of animals tended to recognize the now-familiar environment and freeze—a fear response. But if the mice were returned to the box after two weeks or more, only the sedentary mice froze. The exercisers seemed to have forgotten their fears.

Running imposes physiological changes aside from neurogenesis, of course, but the team saw the same failure in memory recall when they specifically increased neurogenesis pharmacologically in the mice. They also found that inhibiting neurogenesis in exercising mice and in infant mice made the animals better at remembering.

The team also showed that rodents such as guinea pigs, which have reduced neurogenesis in infancy compared with mice, tended to remember a fearful experience for much longer than did infant mice. And boosting the guinea pigs’ neurogenesis caused them to forget their fears more readily.

As Insel pointed out, previous studies have indicated that neurogenesis in adults is beneficial to learning and memory—a finding that seems at odds with Josselyn and Frankland’s. However, said René Hen, a professor at the Kavli Institute for Brain Science at Columbia University in New York, “previous findings have mostly been dealing with the role of neurogenesis in encoding novel information”—that is, learning and remembering something new. “Now, in the Frankland study, they are looking not at the ability of encoding novel information, but at forgetting older information. So one way to reconcile the two is to think of it as a trade-off: if you get better at acquiring new stuff it maybe at the detriment of keeping old stuff.”

Should the results of this study on rodents cause people to worry that training for a marathon might make them forgetful? “People do always say that running clears your mind,” said Josselyn, “and in a sense I would say that’s true.” But clearing one’s mind is not necessarily detrimental, she added. “For instance, I don’t want to remember where I parked my car two weeks ago because that’s going to interfere with me remembering where I parked it today. . . . We think that neurogenesis and forgetting is an important part of healthy memory. We don’t want to remember absolutely everything.”