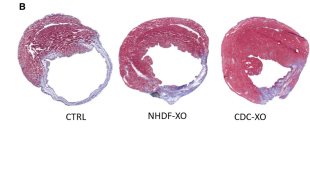 Mouse hearts after a heart attack were injected with a vehicle (CTRL), exosomes from normal human dermal fibroblasts (NHDF-XO), or exosomes from cardiosphere-derived cells (CDC-XO).A.G.-E. Ibrahim et al., Stem Cell ReportsAn early-stage clinical trial, published in the Journal of the American College of Cardiology in January, showed that a certain type of stem cell injected into the human heart could help repair damage after a heart attack. But according to a mouse study published in Stem Cell Reports today (May 6), the cells themselves may be unnecessary. Rather, exosomes—tiny, lipid-bound vesicles secreted by the stem cells—appear to be the essential ingredient for healing injured cardiac tissue.

“This study is very exciting,” said Guo-Chang Fan, who studies exosomes at the University of Cincinnati but did not participate in the research. He added that the results open up the possibility of a “cell-free therapeutic strategy.”

The clinical trial to...

Eduardo Marbán, a cardiologist at the Cedars-Sinai Heart Institute in Los Angeles who led the clinical trial, had suspected that the responses to the cardiosphere-derived cells came from indirect mechanisms, rather than from the physical presence of the cells themselves. Injected cells disappear from the body after a few months, yet their effects appear to linger for at least a year, he said. So he and his colleagues decided to look at the cells’ exports.

They found that wiping out the cardiosphere-derived cells’ ability to release exosomes abolished their heart-mending potential in a heart attack mouse model. Giving the mice cardiosphere-derived cell exosomes alone reproduced the effects of whole cells: the treated animals had more heart tissue, less scarring, and fewer proinflammatory cytokines than did control mice. Marbán told The Scientist that the results support an increasing appreciation for the role of exosomes in regeneration-related signaling. “The dogma would have taught us that exosomes might be part of the story, and [the results] taught us that they may be the whole story,” he said. “That was exciting to us.”

So what is it about exosomes that gives them such regenerative power? Marbán’s group looked for microRNAs (miRNAs) that are enriched in the exosomes from cardiosphere-derived cells, finding that one in particular, miR-146a, was nearly 250 times more abundant in these exosomes than in those released by normal human dermal fibroblasts, which served as a control. Administering miR-146a alone to mice increased heart tissue, but didn’t improve cardiac function, the researchers found. “MiR-146a singly accounts for some of the beneficial effects,” said Marbán, “but it didn't account for everything.”

Ingrid Struman, a project leader at the University of Liège’s genoproteomics group, said she wasn’t surprised that exosomes would have such an impact on cardiac tissue repair, but would not have expected miR-146a to have regenerative effects. Her own work has shown that miR-146a actually impairs cardiac function in mice and levels of the miRNA are elevated in women with peripartum cardiomyopathy, a pregnancy-related heart dysfunction. It will be important to identify the cellular targets of miR-146a in heart attack models, Struman said in an e-mail, “notably because microRNA effects depend on the potential targets that they will find in the recipient cell.”

Struman’s collaborator, Denise Hilfiker-Kleiner of Hannover Medical School in Germany, said it’s possible that exosomes and their miRNA cargo are mediating the effects of inflammation on heart repairs. Although heightened inflammation can be injurious after a heart attack, “a certain degree of inflammation is needed for clearing of dead cells and healing processes,” she wrote in an e-mail to The Scientist. “Thus, for me the data presented here look more as if [cardiosphere-derived cell]-exosomes and miR-146a modulate post [myocardial infarction] inflammation in a beneficial way.”

Although human studies using cardiosphere-derived cells are ongoing, Marbán said he’s interested in the prospect of developing an exosome-based therapy. Exosomes are quite stable outside of the body and lack the baggage of an entire cell. “One of the things that bedevils cell therapy is how difficult they are to do potency assays and to do identity and release criteria and all those kinds of things that you have to do when you put something into human beings,” said Marbán. But it will be critical to be sure that administering exosomes will not cause untoward consequences. Recent studies have implicated the vesicles in delivering metastatic messages, for instance.

And Marbán is not giving up on cell therapy. A Phase 2 clinical trial using cardiosphere-derived cells to treat people who have suffered a heart attack is ongoing.