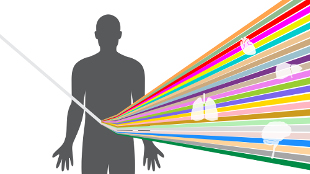 By analyzing more than 1,600 samples representing 43 different tissues from 175 individuals, members of the international Genotype-Tissue Expression (GTEx) Consortium found that unique and shared regulatory DNA variants create similar gene-expression patterns within tissues across individuals, according to a study and two companion papers published today (May 7) in Science.

“It’s a very impressive set of analyses where they are correlating mutations and haplotypes with gene expression in a way that I haven’t really seen before,” said Mathias Uhlén of the Royal Institute of Technology in Sweden. “It’s a landmark paper for sure.”

Previous studies have found that many genomic variations do not occur in protein-coding genes, but rather in regions of the genome that regulate their expression. And other work has examined tissue-specific gene regulation. But these two lines of inquiry have long been followed separately. The GTEx Consortium bridges the gap by comparing regulatory...

The international team of scientists from the U.S., Switzerland, Estonia, the U.K., Spain, Canada, Brazil, the Netherlands, and France collected 30 to 50 tissue samples from each recently deceased donor, characterized DNA variants within them, and sequenced the expressed RNA from each sample. The preliminary study compared nine unrelated tissues with the highest sample representation, far more types of tissue than have been examined in larger studies.

In an overview of the first phase of the project, the researchers identified expression quantitative trait loci (eQTLs) relevant to gene regulation in each tissue, finding that tissues varied in their number of eQTLs, ranging from 919 found in the heart samples to 2,244 in thyroid.

Next, the scientists compared the eQTLs across tissues, allowing them to identify further eQTLs that might have gone undetected in a single tissue. These eQTLs were mostly either unique to a particular tissue type or shared among all the tissues analyzed. “It’s starting to give us a sense of how this regulation is patterned differently across different tissues,” said study coauthor Kristin Ardlie of the Broad Institute.

The researchers also compared the eQTL results to previous genome-wide association studies (GWASs) for particular diseases, discovering that an eQTL found in tibial artery tissue correlated highly with a single-nucleotide polymorphism (SNP) linked with regulating blood pressure. Just as the switch from a candidate gene approach to a genome-wide approach led to unexpected discoveries, the expanding GTEx dataset could help researchers move from a candidate tissue-based approach toward a tissue-agnostic approach when searching for disease-associated variants and changes in gene expression, said Dermitzakis.

“GTEx is a beautiful example of how you could conduct such analyses that really could be of use to the clinic,” said Lude Franke of the University of Groningen, the Netherlands, who was not involved in the study.

The preliminary GTEx studies could also help scientists parse protein expression. Already, said Uhlén, his team has used the open source GTEx data to enhance the map of the proteins expressed in each human tissue.