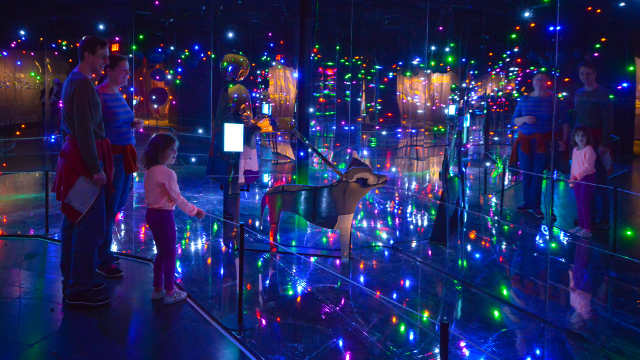 © AMNH/D. FINNINYou enter through a dark corridor studded with points of light—green, red, and blue coming from all directions. The lights represent not stellar glimmers but microbial cells. Mirrors on the walls amplify the spots of brightness, and you see yourself among them. These aren’t just any microbes; they’re the trillions of viruses, fungi, bacteria, and protozoans living in and on your body.

“The Secret World Inside You,” which opens at the American Museum of Natural History (AMNH) tomorrow (November 7), takes visitors on a tour of the human microbiome—a collection of organisms that weigh 2–3 pounds, or about the same weight as the brain. And like the brain, our commensal microbes influence the way the body works, from digestion to cognition and behavior. “Each of us is a complex ecosystem made of hundreds of species, one of which human and the rest microbial,” show cocurator Robert DeSalle... 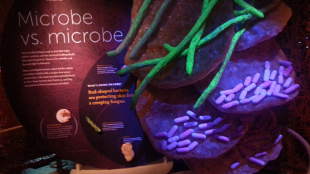 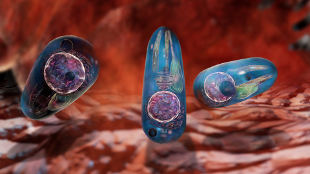 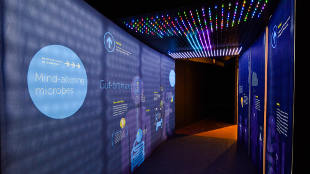 © AMNH/D. FINNINYou may have heard the story of the parasite that makes mice unafraid of cats. Toxoplasma gondii reproduces in felines and uses mice as a vector to go from cat to cat. We humans, the exhibit explains, are subject to similar microbial influences. People infected with T. gondii have a higher rate of car accidents, for example.

More generally, the microbiome, 99 percent of which lives in the gut, influences the nervous system. The gut, also home to millions of neurons, communicates with the brain in what’s known as the gut-brain axis, and research indicates that gut microbes can influence what the gut “tells” the brain.

“There’s really a growing appreciation in the scientific and medical community that the two systems, the brain and the gut, do not operate independently, yet have very important connections that affect the biology of both systems,” said CalTech’s Sarkis Mazmanian, who was not involved with the AMNH exhibition. In 2013, Mazmanian led a study that linked variations in the gut microbiome with autism-like symptoms in mice, also showing that a probiotic treatment mitigated the animals’ autism-like symptoms. Other animal research has suggested that variation in gut microbes can also influence other brain-related disorders, such as anxiety and depression.

The exhibit includes hands-on activities such as tabletop, arcade-style games where you “shoot” different foods, antibiotics, and even probiotics and fecal transplants at your gut microbes and see what happens. The game makes the point that while some microbes can cause harm, so can antibiotics. Other microbes, in contrast, are beneficial.

At the end of the exhibit, in a chamber whose white walls are patterned with candy-colored Petri-dish circles, a museum staffer in a lab coat engages guests in an almost game show–like presentation about the microbial makeup of different body parts, including the bellybutton. Bellybuttons are rather uncharted territory, microbiologically speaking. But to say more would spoil the fun.