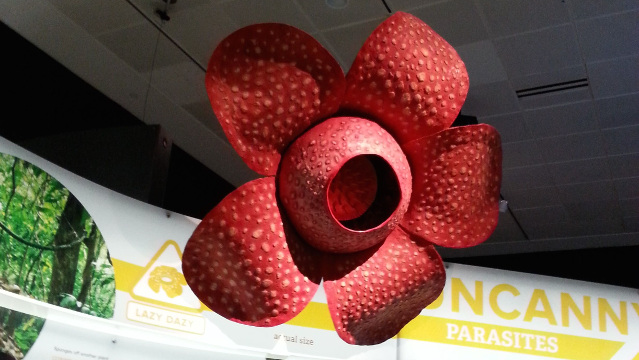 Model of a corpse flower, which attracts carrion flies by producing an odor like that of rotting flesh.ASHLEY P. TAYLORDespite the odds, life inhabits practically every inch of Earth. “That’s the marvelous thing,” said ichthyologist John Sparks, who along with parasitologist Mark Siddall cocurated the exhibit “Life at the Limits: Stories of Amazing Species” on display at the American Museum of Natural History (AMNH) in New York City. “Life is so tenacious; it’s resilient; it’s resourceful, and every place it can live, it does, basically. Every habitat we’ve looked at, from the top of the Himalayas to the bottom of the ocean trenches, from boiling hot springs to deep sea vents—there’s life there.”

The exhibit, which opens tomorrow (April 4) in AMNH’s LeFrak Family Gallery, explores the diversity of life at Earth’s extremes of temperature, pressure, wetness, and aridity—and everywhere in between. The exhibit also highlights the...

While most creatures featured in the exhibit have adapted to one extreme or another, the tardigrade, the tiny animal whose scaled-up models hang from the ceiling at the gallery’s entrance, can withstand environmental extremes of all sorts. This creature, called the water bear, is about the size of a poppy seed and has a round body, eight legs, and a round protruding snout that makes it look like a caterpillar in a gas mask. When conditions are unfavorable, the water bear forms a spore-like like state that can survive boiling, freezing, high pressure, and the vacuum conditions and radiation levels of outer space. When conditions improve, it reanimates itself.

This astounding creature, the exhibit’s poster child, may have been missed without the aid of rigorous research (and microscopy).

Asked during a press conference how the study of extremophiles on Earth might inform researchers about the possibility of life on other planets, Siddall replied: “that kind of research . . . expands the range of possibility of where we might find life [beyond Earth], should we find it one day.”

“Life at the Limits: Stories of Amazing Species” will be on view at the American Museum of Natural History from April 4, 2015, through January 3, 2016.