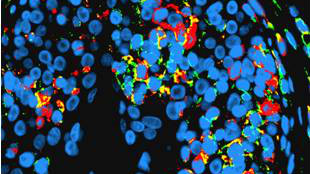 A mixture of recipient and donor immune cells during rejectionCOURTESY OF BRIGHAM AND WOMEN'S HOSPITALIn recent years, pioneering surgeons have been transplanting faces, giving newfound features, facial mobility, and other benefits to patients whose own faces have been badly disfigured. Serial skin biopsies from five face transplant recipients at Brigham and Women’s Hospital in Boston are now shedding light on the dynamics of rejection, a phenomenon in which the transplant recipient’s immune system recognizes the donor tissue as foreign, according to a paper published today (January 17) in Modern Pathology. Contrary to previous assumptions, it appears that the transplant recipient’s T cells are not the only immune cells active at rejection sites—the Boston team found that T cells from the donor can be found there, too.

“I think the most fascinating possibility is that the passenger resident immune cells . . .  might actually be mustering...

But Linda Cendales, a hand transplant surgeon at Emory University in Atlanta who was not involved in the study, noted that staining of donor T cells was not definitive. “The methods used to establish the origin of the cells need to be more robust,” she said.

The researchers analyzed biopsies from the five face transplants performed by Bohdan Pomahac and his colleagues between 2009 and 2013. Face transplant recipients are monitored extensively in the months and years following their surgeries so that doctors can give them immunosuppressant drugs to control rejection. All five patients have thus far experienced incidents of rejection, but have avoided chronic rejection.

Hospital pathologists analyzed the biopsied skin tissues for standard signs of rejection. But they also looked at other biomarkers in three of the patients, attempting to distinguish between donor and recipient T-cell activity using antibodies for antigens that varied between donors and patients.

At sites where rejection tends to take place, such as around blood vessels, hair follicles, and in the epidermis, donor T cells were highly prevalent. “There were some places where donor cells outnumbered the recipient cells,” Murphy said.

Intriguingly, the donor T cells found at rejection sites were often resident memory T cells, a recently characterized type of T cells that live in the skin rather than circulating around the body. For many years, scientists thought that T cells only made their way to the skin in time of need, but it has recently become clear that resident memory T cells constantly patrol the skin for viral infection and other threats. These specialized cells would be well positioned to travel within the donor face. “Basically what you have going on in the graft is a front-line clash of two immune cells meeting each other,” Rachael Clark, a dermatologist at Brigham and Women’s Hospital who was not involved in the study, told The Scientist in an e-mail. Clark, who has done foundational work on resident memory T cells, said that she plans to collaborate with Murphy and colleagues in the future.

To be sure they could identify donor versus resident T cells, the researchers acknowledged that it would be useful to compare the mRNA and DNA of the cells. Murphy said that his team is still trying to fully assess the significance of the findings. One possibility is that donor T cells are not in fact attacking recipient T cells, but rather are attacking the donated facial tissue. It also remains unclear whether similar donor immune processes could be at work in other types of transplants involving skin.

Still, Murphy is hopeful that, with validation, donor resident memory T cells could be used as a biomarker to assess rejection of face transplants, or even harnessed therapeutically, to help minimize rejection. “The idea that the face comes prepared to defend itself is an amazing new idea,” he said.