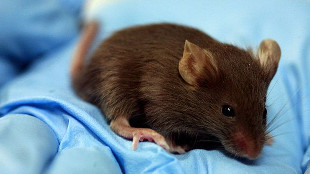 WIKIMEDIA, RAMADifferences in male and female rodent sexual behaviors are programmed during brain development, but how exactly this occurs is not clear. In the preoptic area (POA) of the brain—a region necessary for male sex behavior—the female phenotype results from repression of male-linked genes by DNA methylation, according to a study published today (March 30) in Nature Neuroscience.

There is very little known about how the brain is masculinized—and even less about how it is feminized—even though the question has been studied for more than 50 years, said Bridget Nugent, study author and now a postdoctoral fellow at the University of Pennsylvania.

These sex differences in the brain are programmed toward the end of fetal development, through to one week after birth in rodents. In males, testicular hormones drive masculinization of the brain; this was thought to occur by direct induction of gene expression by hormone-associated transcription...

“This study reveals that DNA methylation plays an important role in regulating sexual differentiation,” said Nirao Shah, who also studies the neural basis for sex-specific behaviors at the University of California, San Francisco, but was not involved with the work.

“Our understanding that the female state of the brain is the default still stands. What changes now, because of this study, is our thinking as to how the default state is preserved,” said Geert de Vries, director of the Neuroscience Institute at Georgia State University who studies how sex influences the developing brain but was not involved in the work. “The authors show that there is active repression of the masculine brain program, and that is really a novel idea.”

In other words, male hormones unleash the male program. “It’s an emancipation, you might say, of these genes that are suppressed by the female. So, evolutionarily, this evolved a lot differently than we thought,” said study author Margaret McCarthy, a professor of pharmacology at the University of Maryland School of Medicine.

Nugent, McCarthy, and their colleagues demonstrated that activity of DNA methyltransferase (Dnmt) enzymes—which control the methylation of DNA, and therefore gene repression—was lower in the POA of the brain in male versus female rats during the sensitive period. Treating newborn female rats with male hormones resulted in male-level Dnmt activity, but had no effect on older rats. Typical female rats also had twice the levels of fully methylated CpG sites throughout their genomes compared to either male or masculinized female rats.

The team was then able to drive both male morphology within the POA and male copulation behavior in female rats by administering small molecule inhibitors of Dnmts directly into the brain at birth.

While giving male hormones to females only modified female rodent sexual behavior during the critical period, inhibiting Dnmts led to a male phenotype even after the sensitive window had closed, 10 days after birth. The researchers also found that knocking out one of the Dnmt enzymes in a mouse model several days after birth—outside of the sensitive development window—resulted in female mice exhibiting male copulation behaviors.

Because disrupting DNA methylation even after female brain programming has occurred can result in masculinization, the results imply that after brain development, the female brain state still needs to be maintained by methylation patterns, said Nugent.

“This is the first study to identify a molecular component of sexual differentiation that appears to be part of the causal change of testosterone masculinizing the male brain,” Marc Breedlove who studies sexual differentiation of the developing brain at the Michigan State University told The Scientist in an e-mail. “The idea that testosterone might be acting by decreasing methylation, thereby releasing many genes from epigenetic repression, is an important contribution, and is likely to spur a lot of new research lines,” wrote Breedlove, who was not involved in the research.

Using whole-genome RNA sequencing, the authors also showed global differences in not only RNA levels but in the expression of male and female-specific splice variants and differential promoter usage. These differences accounted for more variability between males and female mice compared to differences in gene expression, said McCarthy.

“We thought there would be spectacular differences only in those brain areas that control different sex behaviors, but its much more pervasive,” said de Vries. Taken together, these latest findings suggest that there may be more sex differences in the rodent brain than previously thought. “The brain is really a mosaic of different stories of sexual differentiation,” de Vries said.