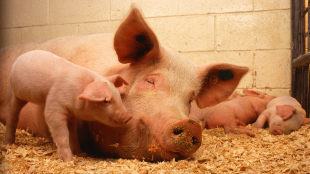 WIKIMEDIA, KEITH WELLEROld wives’ tales abound about how to tip the odds of conceiving a boy or a girl. Some say that depositing the sperm closer to the cervix gives Y chromosome-carrying sperm a better chance to reach the egg first. Another urges would-be moms to eat a more acidic diet if they want to have a girl. Much of the advice focuses on how to give sperm carrying either an X or Y chromosome some sort of advantage, but for the most part, none of it has been validated by science.

A study published today (May 21) in BMC Genomics now suggests that female mammals may be able to sense and respond differently to X and Y chromosome sperm. Alireza Fazeli, a reproductive biologist at the University of Sheffield in the U.K., and colleagues show that in the presence of either predominantly X or Y sperm...

According to coauthor Carmen Almiñana, a research fellow at the University of Murcia in Spain, this is the first evidence that the female can somehow tell the difference between X and Y chromosome sperm prior to fertilization and activate signaling pathways in a sex-specific way.

“What this study shows is that one possible way in which mammalian mothers could influence the sex ratio of their offspring is through differential . . . responses to X and Y chromosome sperm,” said evolutionary biologist Tommaso Pizzari, who studies sexual behavior at the University of Oxford and who was not involved in the work.

Taking advantage of the large, long oviducts of pigs, the researchers injected X chromosome-carrying sperm into one oviduct of a female pig and Y chromosome-carrying sperm into the other oviduct using laparoscopic surgery. To separate X and Y sperm prior to the injection, Almiñana and her team took advantage of a sorting technique—routinely used in cattle for the dairy industry—that divides the cells based on the amount of fluorescent dye staining their DNA, given that Y sperm have less genetic material. They then sampled each oviduct 24 hours later. Measuring the responses to both types of sperm in the same animal avoided the potential confounding issues of comparing the results from different animals.

To get a sense of how the pigs’ oviducts react to the presence of sperm, the team analyzed the gene expression of the tissue. Microarray analysis showed that 501 genes, about 2 percent of the pig genome, were differentially expressed in the two oviducts. These included genes involved in endocrine, immune, and signal transduction functions. Sixty percent of the genes upregulated in response to Y chromosome-bearing sperm were associated with immune system function. Almiñana said the results suggest that immune factors could be a molecular screen to preferentially bias either X or Y chromosome sperm to reach the oocyte first.

These results are preliminary, as only four female pigs were used for the experiments. David Miller, a biologist who studies fertilization at the University of Illinois, told The Scientist in an e-mail that further studies are necessary to understand whether an ability to differentiate between the two sperm types is actually used by mammalian females to skew their offspring’s sex ratio, something that may be advantageous in certain conditions.

Pizzari agreed that while this was a commendable effort to expose a female to each sperm type, the study was descriptive with no cause and effect conclusions. “The fact that some genes are up- or down-regulated in association with [each sperm type] says little about whether any formal sperm selection actually occurs.”

An unanswered question is: If the female reproductive tract can tell the difference between X and Y sperm, what exactly is being sensed? Although this study suggested that there are differences, how X and Y sperm are actually different is a matter of debate, according to Miller.

The researchers are now working to establish an in vitro model of the oviduct to identify the sensor that can differentiate X and Y chromosome sperm and further tease out how female reproductive tract cells respond to these sperm types.

“For a long time, it was thought that the oviduct was merely passive, but now we see that the environment of the reproductive tract can react and adapt to different cell types,” said Fazeli.

C. Almiñana et al., “The battle of the sexes starts in the oviduct: modulation of oviductal transcriptome by X and Y-bearing spermatozoa,” BMC Genomics, 15:293, 2014.