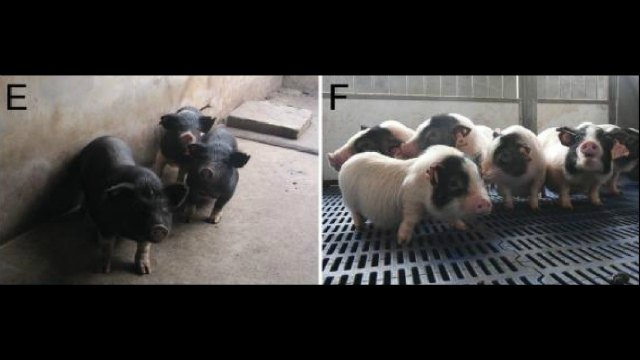 These images show mutant Bama miniature pigs, with black coat denoting the mutations in pigs on the left and short limbs and small body size of those on the right. HAI ET AL., ELIFE, 2017For the first time, researchers report the use of the mutagenic chemical N-ethyl-N-nitrosourea (ENU) to conduct a genetic screen in pigs. The data reveal mutations associated with splay leg, which makes it difficult for piglets to stand and walk, and also with inner ear malfunctions that mimic a similar condition in humans.

The results, published June 22 in eLife, suggest that mutagenesis caused by ENU could be used as an alternative to worms, fruit flies, and rodents to model human disease, and as a tool for the pork industry.

“Pigs are an important source of meat worldwide and are considered as preferred models of various human diseases,” study coauthor Jianguo Zhao of the...

N-ethyl-N-nitrosourea is a potent chemical that randomly alters DNA nucleobases by transferring an ethyl group to a base, usually thymine, resulting in a point mutation typically in the stem cells that mature into sperm. Such changes can lead to null alleles, partial loss-of-function mutations, and gain-of-function mutations, similar to many mutations associated with human diseases.

ENU mutations have been induced often in model organisms ranging from Caenorhabditis elegans and fruit flies to zebrafish and mice, and have led to the discovery of genes and genetic pathways in embryonic development, organ development, and the causes of numerous diseases. But it was unclear whether the technique could be used in larger animals like pigs. Pig genomics lags far behind other model organisms: for comparison, the whole-mouse genome is on version 38; the whole-pig genome has barely surpassed version 10.

In the new study, Zhao and colleagues injected ENU into Bama miniature pigs. The animals received three doses over three weeks. The treated males were then bred with normal females and their offspring were bred again. As a result, the team ran genetic screens of more than 13,000 pigs and looked for mutations causing disease.

Splay leg syndrome, which makes it hard or impossible for piglets to stand on their hind legs, appears to be associated with the upregulated expression of the gene FBXO32, the researchers report. The gene had been implicated in previous studies, but the connection had been controversial. The new findings offer “more evidence that FBXO32 might be responsible for congenital splay-leg syndrome in pigs,” the team writes in the paper. 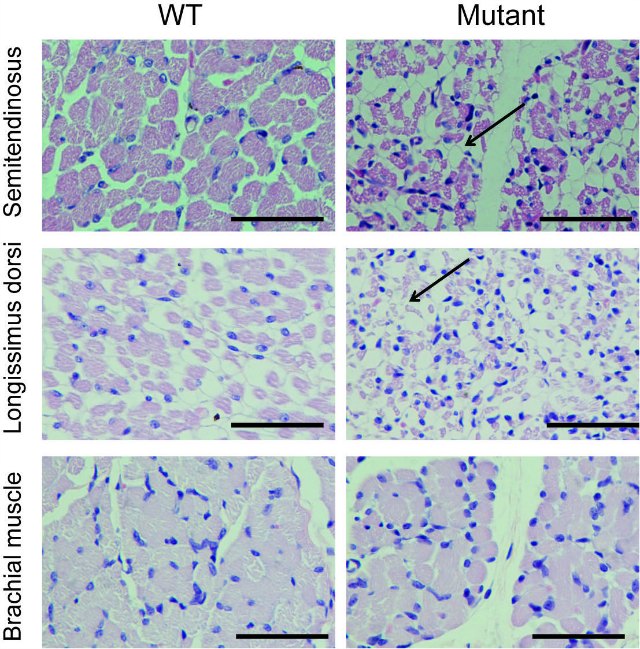 A comparison of healthy and mutant pigs’ tissues shows thickening and scarring between cells and also the lack of forelimb muscle (black arrows). The mutant pigs had splay leg syndrome. The scale bar is 50 micrometers.HAI ET AL., ELIFE, 2017

Catherine Ernst, who runs an animal genetics lab at Michigan State University, suggests the technique could be valuable for agriculture. “ENU mutagenesis could be an important experimental tool for identifying genes and gene functions that can be incorporated into genetic selection programs,” she tells The Scientist in an email. Genetic selection improves pig populations, making them resistant to disease and resilient to environmental stresses, she writes. Selection based on genetics can also boost pigs’ reproduction and pork production.

The results could also be important for identifying novel genes at the root of human disease. In the study, the team showed that a mutation in the gene SOX10 causes inner ear malfunctions in pigs. These genetic changes and the resulting deafness in pigs mimic hearing loss caused by Mondini dysplasia in humans. The genetic underpinnings of the condition in humans are unknown. However, by identifying a genetic mutation in pigs that resembles the human disease, the researchers may have generated an animal model for the condition.

“The paper speaks for itself,” David Beier of Seattle Children’s Research Institute told The Scientist in a phone interview. He has done ENU mutagenesis studies in mice and says the team has taken the necessary step to show the technique can be used in pigs, and it can provide interesting results. However, he is not sure the result will lead more researchers in the field to “switch to working on pigs,” because the cost could be higher without the promise of an equivalently larger benefit.