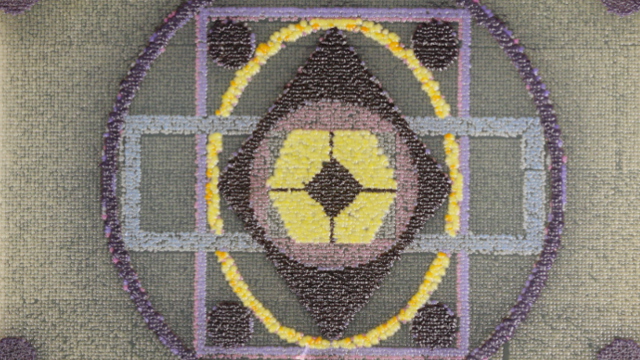 Art made by bioprinting yeast—engineered to produce six pigments—onto an agar plate.NYU LANGONE MEDICAL CENTER/INSTITUTE FOR SYSTEMS GENETICS/BOEKE LAB, JASMINE TEMPLEA large consortium of researchers, spread across four countries, has synthesized about one-third (approximately 3.5 million base pairs) of the 12 million base pair genome of the budding yeast, Saccharomyces cerevisiae. The team’s work—which was led by Jef Boeke, a yeast geneticist at New York University’s Langone Medical Center, and includes analyses of the 3-D structures of several synthetic chromosomes—is outlined in a series of seven papers published today (March 9) in Science.

In 2010, a separate team created the first bacterial organism with a functional, 1 million base pair synthetic genome. This latest study “is a significant milestone towards creation of the first fully synthetic eukaryotic genome,” Daniel Gibson of Synthetic Genomics in La Jolla, California, who led the teams that created the...

In 2014, Boeke and another group of researchers synthesized the first eukaryotic chromosome: a slightly pared-down version of S. cerevisiae chromosome III. Since then, Boeke’s group brought additional collaborators on board the Synthetic Yeast Genome Project team, to synthetize a designer 11.3 million base pair yeast genome in a project they’ve called Synthetic Yeast 2.0, or “Sc2.0.” The effort is one of the pilot projects of Genome Project-Write.

“This is remarkable,” Michael Jewett, codirector of the Center for Synthetic Biology at Northwestern University, who was not involved in the work, wrote in an email to The Scientist. “What’s so exciting is the pace of progress that is being made by this international consortium. Their speed is teaching us that we can move science forward faster if we all work together.”

The team also moved the more than 1 million base pair repetitive ribosomal DNA from synthetic chromosome XII to other yeast chromosomes, showing that the placement of this large gene cluster is flexible, and that changing its location does not appear to negatively affect cells.

Researchers designed the original synthetic yeast chromosome, known as “SynIII,” before it was built by a team of undergraduates who synthesized short DNA sequences that gradually replaced a naturally occurring chromosome III until the entire chromosome was composed of synthetic DNA. For Sc2.0, the team used a similar approach: to synthesize five additional chromosomes, the team started with shorter sequences (around 750 base pair each), which they gradually assembled into 50 to 60 kilobase DNA segments in vitro, and then recombined with existing chromosomes in yeast cells. Undergraduate students at Tianjin University in China built one of the five new synthetic yeast chromosomes, chromosome V.

Replacing six of the 16 native chromosomes with synthetic ones did not appear to affect growth of the budding yeast, the researchers reported. And the spatial organization of the S. cerevisiae genome was not drastically impacted by the modified and synthetic chromosomes.

Building chromosomes from scratch enables scientists to understand the extent to which genomic organization affects the biology of a cell. “From the beginning, we’ve said that if we’re going to invest the time, energy, and funds to this project, we need to take risks with the design to have the payoff of having interesting biology results,” said Boeke.

“This work is a step toward better understanding eukaryotic genome design principles and fundamentals of eukaryotic cell biology,” wrote Gibson. “Ultimately, the synthetic yeast should have a more stable genome, have the capacity for incorporation of non-standard amino acids, and an approach to remove non-essential genes simultaneously and select for desired phenotypes.”

“The real genomics revolution [we are entering] is the interplay of chromosome-scale reading and writing,” Harvard’s George Church, who collaborates with Boeke and colleagues on Genome Project-Write but was not involved in the present study, wrote in an email to The Scientist. These new works “are operating at that scale, exploiting parallel testing of 50 kilobase pair chunks that enable making far more radical sets of changes than would be feasible at a base pair or whole-genome transplant scale.”

Boeke said the Sc2.0 team is now working to synthesize and test the functions of the remaining 10 chromosomes.

“Genome Project-Write seems to be off to a great start technically,” wrote Church. “We will soon know how this generalizes to agricultural and medical applications.”