This satellite image shows Hurricane Harvey spinning on the Texas coast on August 28, 2017.NOAATwo feet of rain have fallen on Houston and other parts of East Texas since Tropical Storm Harvey made landfall Friday evening, August 25, as a Category 4 hurricane. As the downpour continues this week, researchers are waiting to see the full extent of the damage from historic levels of flooding.

Thousands of people have been rescued from submerged streets and buildings, and many more will be forced from their homes. Major airports have been shut down since the weekend, some hospitals have evacuated patients, and numerous campuses posted closings, including the University of Houston and Rice University.

The University of Texas’s Marine Science Institute in Port Aransas experienced “extensive damage” from flooding, according to a press release. As The Scientist reported on Friday, researchers there were shoring up their...

No one can get in to deal with their experiments.—Adam Kuspa,
Baylor College of Medicine

“I would suggest that the city of Houston is almost in a paralyzed situation right now,” Robert Emery, vice president of Safety, Health, Environment, and Risk Management at the University of Texas Health Science Center at Houston (UT Health), tells The Scientist. “I actually walked to my office yesterday, because I couldn’t drive. It was seven miles. Literally, I’m six-foot-six-inches tall, and there was water up to my chest.”

Fortunately, the water stayed outside the UT Health buildings, other than minor leaking. Flood doors, pumps, and other protective measures have kept the facilities relatively dry, says Emery. “Our campus has suffered minimal damage. . . . The problem is there’s so much water out there.” 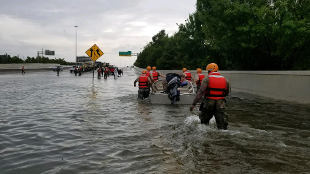 Baylor College of Medicine in Houston closed its campus to all but essential staff, leaving behind only a “rideout team” of roughly 50 employees. These include building managers and animal caregivers and veterinarians, says Adam Kuspa, the dean of research, who spoke to The Scientist from Dallas. “They would have been in there since Friday,” says Kuspa. “It’s quite a heroic thing.” UT Health and the University of Houston also have rideout teams in place.

Researchers, however, are unable to reach their labs. “No one can get in to deal with their experiments,” says Kuspa.

See “Labs in Texas Batten Down the Hatches”

Claire Bassett, Baylor’s vice president for communications, is among those sleeping on cots and air mattresses as part of the rideout team. She says that researchers were prepared and set up their labs in advance so that the rideout staff could manage them in the scientists’ absence. “Every bit of our research is fine,” she says.

Although Baylor’s main campus is surrounded by flooded streets, the college’s grounds remain relatively unharmed. “In 2001, after [Tropical Storm] Allison occurred, we built a flood wall with flood gates that completely enclose the campus,” Kuspa says. On Friday, Baylor began to deploy the flood gates, which have successfully kept the water at bay since the storm hit Saturday. Bassett says a little water came into the hallways, but nothing that disrupted operations.

Similarly, the University of Houston reports that buildings are holding steady and no laboratories have been affected by the storm. “There is still a concern about ultralow refrigeration where a power outage and a concurrent failure of generators would lead to major test sample problems. But this has not happened,” Amr Elnashai, vice president for research and technology transfer at the university, says in an email.

Further inland, despite getting walloped by rain, universities are faring well. “Just some very minor leaks, and everything’s pretty good,” says Keith Randall, the news director at Texas A&M University in College Station, roughly 100 miles northwest of Houston. As of Monday morning, College Station had received 14.5 inches of rain, according to the National Weather Service, and classes were cancelled Monday and Tuesday.

The University of Texas in Austin, where 6.5 inches of rain have fallen since Friday afternoon, remains open without significant damage. But as Christine Sinatra, the director of communications at the College of Natural Sciences, notes, “there’s still more rain forecast for our part of Texas.”

Clarification (August 28): The story has been updated to make clear that the University of Texas Austin has no significant damage, as opposed to no damage whatsoever. The Scientist regrets any confusion.