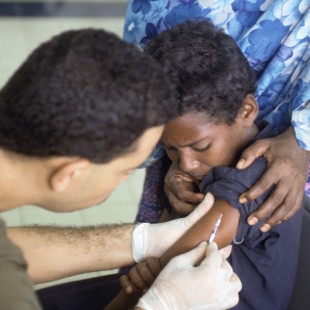 WIKIMEDIA, ANDREW W. MCGALLIARDDepending on when and where in the world you were born, you may have received a different kind of polio vaccine than someone else born into different circumstances. If you were born in the U.S. after 2000, for example, you likely received an injection of the inactivated polio vaccine (IPV), but before that, you might have received the oral polio vaccine (OPV), a live attenuated virus, administered by mouth. Starting later this year, children born in polio-affected countries will receive both vaccine types, per World Health Organization (WHO) “endgame” plans to finish the job of eradicating polio.

The results of a study published today (August 21) in Science support this approach. In a group of Northern Indian children who had already received one or more doses of OPV, a supplementary dose of IPV bolstered their immune responses and reduced their shedding of viral particles in...

Since 1988, more than 10 billion doses of OPV have been administered and more than 10 million polio cases have been prevented, according to the WHO. However, the intestinal or mucosal immunity proffered by the vaccine, which in an ideal situation both prevents virus from surviving within the gut and from spreading to the nervous system, wanes after as little as six months. And booster doses of OPV don’t solve the problem: children who have received up to seven doses of OPV continue to shed the virus, according to a 2009 The Journal of Infectious Diseases report. Additionally, the success rate of the OPV varies depending on circumstances, such as sanitation and the viral load in a particular area. It is particularly low in Northern India, the authors of this latest study noted.

“What this study addresses is ‘Does this vaccine, IPV, in countries that are using OPV . . . offer added benefits?’” said Manish Patel, of the Decatur, Georgia-based Task Force for Global Health who was not involved in the work. “And the answer is yes, it offers substantial benefits to using [OPV] alone in the eradication process.”

“This study resolves a more than 50-year debate—dating back to the time of Jonas Salk and Albert Sabin—as to which vaccine is better,” study coauthor Roland Sutter of the WHO’s polio eradication branch told reporters during a press briefing on Wednesday (August 20). “The answer is now very clear: both vaccines complement one another, and should be used to interrupt the final chains of transmission to attain a polio-free world in the most rapid and effective way possible.”

The debate over which polio vaccine to use reflects the fact that the two vaccines have different strengths and weaknesses.

IPV elicits higher levels of antibodies in the blood than OPV, and since it does not reproduce, it confers no risk of reverting to a neurovirulent form and/or spreading from person to person. The medical case against it, however, has been that when administered as a first immunization, it confers only low levels of immune response in the gut and other mucous membranes. It is, therefore, less effective at preventing the virus from replicating in the gut and being shed in the stool. IPV is also more expensive and more difficult to administer than OPV.

OPV, on the other hand, provides better mucosal immunity than IPV, but because it’s a live virus, it can replicate and revert to a neurovirulent form that endangers its host and could fuel outbreaks.

To test the effectiveness of IPV as an OPV booster, the team administered either IPV, bivalent OPV (against poliovirus types 1 and 3), or no additional vaccine to more than 900  infants and children, grouped by age, who had already received the oral vaccine. One month after the experimental vaccination, the researchers gave the study participants a “challenge” dose of OPV and observed how well their immune systems fought off the vaccine virus. They measured poliovirus excretion and virus titer on days 3, 7, and 14 following the challenge.

The researchers found that an additional dose of IPV significantly reduced the percentage of subjects shedding poliovirus types 1 and 3 by amounts ranging from 38.9 percent to 75.7 percent from the levels observed in children who received no additional vaccine.

This is a noteworthy result, said John Modlin, deputy director of the Bill & Melinda Gates Foundation’s polio eradication branch. “We know that when we give IPV for primary immunity . . . that it doesn’t produce very good intestinal immunity; however, when you give IPV in the background of widespread OPV use in the population,” Modlin said, “it turns out that IPV is actually [effective] at boosting intestinal immunity.”

The children who received the booster dose of IPV also had higher levels of antibodies in their blood after one month, with most patients exhibiting seroconversion—a four-fold increase in antibody production—than both those in the control group and those who received an additional dose of OPV.

WHO and other public health organizations are interested in testing the effectiveness of IPV in developing countries because an eventual goal is to eliminate OPV altogether, said Modlin. The WHO-led gradual phase-out of OPV will continue into 2015 with a transition period in which a dose of IPV is added to the three doses of OPV used for routine immunizations in OPV-using countries.