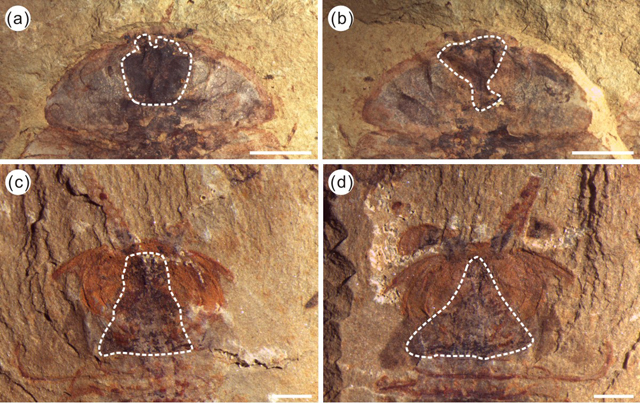 Pigmented structures found in the head regions of fossilized arthropodsJ. LIU ET AL, PROCEEDINGS OF THE ROYAL SOCIETY B, 2018Finding preserved soft tissue—such as brain or muscle—in fossils that are millions of years old is rare, and possibly even more so given a new suggestion that some reports of such discoveries may be misinterpretations. A study published today (April 11) in Proceedings of the Royal Society B challenges previous work identifying brain tissue in half-billion-year-old arthropods from southern China. The authors assert that the fossilized structures are actually preserved microbes, igniting debate among paleobiologists

“Interpreting the anatomy of ancient fossils is always a challenge,” coauthor Jason Dunlop of the Museum für Naturkunde in Berlin writes in an email to The Scientist. “The difficulty is trying to work out whether what you are seeing is really part of the animal’s original body, or an artifact which...

In 2012, Nicholas Strausfeld of the University of Arizona and colleagues described the preservation of the brain and optic lobes of a fossilized arthropod, about four centimeters long with a many-segmented, shell-covered body. The findings were surprising, not only because few expected soft tissue to survive fossilization, but also because the brain in question was more complex than anticipated based on the organism’s evolutionary position. In order to understand more about how delicate tissue such as the brain could be preserved in such great detail, Dunlop and colleagues examined more than 800 of these arthropod fossils from a collection at the Early Life Institute in Xi’an, China.

There is no direct evidence at all what these pigmented areas represent.—Nicholas Strausfeld,
University of Arizona

In the head region of about 10 percent of the fossils, they observed pigmented, bulbous structures with extensions that connect to the eye stalks, which the authors say Strausfeld and colleagues had determined were brains. (Strausfeld argues that these formations in the Dunlop paper are not the same structures he characterized as brains.) Yet the team also identified similar features in the gut regions of several specimens. And in the heads of other fossils, they found pigmented areas in a variety of shapes and sizes with an irregular number and degree of extensions.

“We realized that what was being called the ‘brain’ was actually preserved with quite different shapes and sizes which led us to doubt the original interpretation,” Dunlop tells The Scientist.

Based on evidence from decay studies in modern arthropods and the variability of these features across the collection of fossils, the authors hypothesized that they are not brains, but microbial biofilms that were fossilized at the same time as the animals were. They examined specimens fossilized at different points in the decay process and interpreted the brain-like structures as halos of biofilms that emanated from the organisms’ guts during the process of decay.

“We hope that our results will encourage other people who think they have found brains, or other soft tissues, in fossil arthropods to think carefully about what they are really seeing and to rule out other possible explanations,” Dunlop writes.

Those who say brains are indeed preserved in fossils, including Strausfeld, are not convinced biofilms explain these intriguing structures. “There is no direct evidence at all what these pigmented areas represent,” says Strausfeld. “If they’re going to suggest they’re from a bacteria substrate that occurs during fossilization, they need to demonstrate that this stuff is bacterial,” he adds.

Dunlop and colleagues base their hypothesis about microbial biofilms on experiments of how modern arthropods decay. For instance, in a 2015 study of brine shrimp, Graham Budd, a paleobiologist at the Univeristy of Uppsala in Sweden who was not involved in Dunlop’s study, and colleagues showed that biofilms migrate into the body cavity of the shrimp during decay. These biofilms can then create structures like the authors found, Budd tells The Scientist.

Strausfeld remains unconvinced that the structures Dunlop’s team identified as brain-like and those his team would classify as brains are the same. He says he’s been careful about assigning nervous tissue to fossilized remains, using stringent criteria. Among thousands of fossils examined, he says, he and his team only initially found 10 such structures, though they and other groups have identified more since then. He has seen plenty of irregular structures similar to those Dunlop describes, but he does not interpret these features as brains due to their lack of symmetry and uniformity. “One can actually identify structures that correspond precisely to the brains of modern crustaceans and also modern arachnids,” says Strausfeld.

“Just finding it in a few specimens doesn’t mean that it’s not valid,” says Jakob Vinther, a paleobiologist at the University of Bristol in the U.K. who did not participate in Strausfeld’s or Dunlop’s studies. He recently identified nervous tissue in 520-million-year-old fossilized arthropods from Greenland. Since the initial work on fossilized brains by Strausfeld, “we have found nervous systems in a number of different sites. We’ve also found them in different animals,” he says. Dunlop and his coauthors, too, believe that fossilized nervous tissue does exist—just not among the specimens they looked at.

“There are some really good cases of preserved nerves and nervous systems,” Budd agrees. “The question is, [are] some of these brains—as opposed to the other parts of the nervous system— really being preserved in enough anatomical detail to support evolutionary conclusions? I think we must be more cautious about that.”

Correction (April 11): The article originally stated that the structures at the heart of the debate in the Dunlop and Strausfeld papers are the same. However, Strausfeld says the two teams are actually analyzing different formations. The fourth paragraph has been corrected to reflect the differences in interpretation.