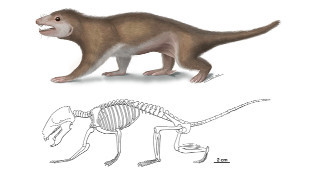 The fossils, presented today (August 7) in Nature, were excavated by two teams working independently in China. Both specimens are nearly complete skeletons of haramiyids—early mammal-like creatures noted for their jaws and teeth—and estimated to be more than 160 million years old. Though the skeletal artifacts suggest the animals may have been relatives, their skeletons show markedly different features.

“Mammalian phylogeny is complex,” said Guillermo Rougier, a professor of anatomical sciences and neurobiology at the University of Louisville, who was not involved in either study. “The events we are trying to resolve occurred in the distant...

However, he added, “the two skeletons just described are precisely the high-quality specimens that allow scientists to contrast and refine our basic understanding of the complex evolutionary patterns involved in the origin of mammals.”

Because of their rodent-like teeth, some researchers have linked haramiyids to multituberculates, a group of ancient mammals. Describing Arboroharamiya, a short-faced, tree-dwelling animal, Jin Meng from the American Museum of Natural History (AMNH) and his colleagues suggest that haramiyids are indeed related to multituberculates, suggesting that mammals may have originated in the late Triassic, more than 200 million years ago.

Meanwhile, a team led by the University of Chicago’s Zhe-Xi Luo depict Megaconus, a terrestrial haramiyid with a primitive jaw and ankle that does not appear related to multituberculates. Compared with the Arboroharamiya fossil, the Megaconus specimen is consistent with a much more recent origin of mammals—around 176 million to 161 million years ago.

“Both proposals have a radically different impact regarding the evolutionary models reflected by the origin of mammals,” said Rougier.

“An early origin sometime around the end of the Triassic period . . . is close in line with the majority of molecular studies that argue for a deep time origin for Mammalia as a whole, and for the modern orders of mammals,” Rougier continued. But, he added, the conclusions of Luo and his colleagues “fall more in line with traditional paleontological studies that recover younger ages for the origin of modern groups.”

Part of the reason mammalian origins are so tough to pin down is because there is no one characteristic, or set of characteristics, than can be used to infer relationships across the class. Further complicating matters is that early mammalian evolution was likely rife with homoplasies—trait similarities that evolved independently, rather than by descent from a common ancestor.

“Each early mammal lineage has its own primitive and derived features that are in conflict with each other,” Luo added. “This can pose difficulty in reconstructing the phylogenetic relationships.”

Reconciling the relationships among Megaconus, Arboroharamiya, and other early mammalian species will require additional analyses, said Meng. “With sufficient data, ranging from molecular to morphological, we will eventually reach to a working hypothesis that will have the power to explain how mammals originated,” he said, though he noted that even then, “we may never know whether that explanation reflects the ‘true process’ for origins of mammals.”