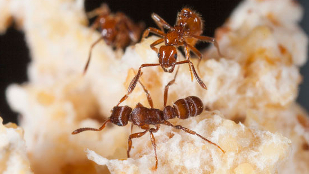 A Megalomyrmex symmetochus ant (top) confronts a Gnamptogenys hartmani raider ant (bottom)ANDERS ILLUMSocially parasitic Megalomyrmex ants establish colonies in the gardens of fungus-growing ants, where they restrict the growth and reproduction of their hosts by feeding on resident broods and clipping the wings of virgin queens. But according to a study out today (September 9) in the Proceedings of the National Academy of Sciences, the presence of these parasitic guests can be beneficial when the host colony comes under attack from another species of ant—the guests use their potent alkaloid venom to fight the raiders and defend the fungal gardens.

“This is really intriguing,” said evolutionary biologist Joan Herbers of Ohio State University, who was not involved in the study. “It’s a novel demonstration that in a certain context, when this nasty predatory ant is around, the parasite can protect the host.” In other words, the parasite-host...

“The findings also highlight how ‘parasitic’ or ‘mutualistic’ relationships are not so clear-cut, and [instead] belong on a continuum of interaction between the two,” Natasha Mehdiabadi, an entomologist at the Smithsonian Institution in Washington D.C., who was not involved in the study, told The Scientist in an e-mail.

Working in the field in Panama, the Smithsonian Institution’s Rachelle Adams saw that one species of venom-alkaloid-producing ants, Megalomyrmex symmetochus, was infiltrating host Sericomyrmex amabilis colonies in greater numbers than other socially parasitic species typically would. She also noticed that the guest colonies boasted far more worker ants than usual. “It wasn’t just the queen and a few workers, as you typically find,” she said, “there were hundreds of workers patrolling the cavities in the host colonies.”

One explanation might be that the guests were at risk of attack by host workers. But the guests’ chemical weapons easily overpower host workers’ biting defenses, so Adams and colleagues wondered whether the hordes of guest workers might be essential to the survival of their own queen in another way. They hypothesized that M. symmetochus might act as defenders when host colonies are attacked by the destructive agro-predator Gnamptogenys hartmani, which Adams had observed invading the same colonies on occasion. To test the idea, she and her colleagues observed interactions among the three species in the lab.

In a series of encounters staged in petri dishes, M. symmetochus workers—which attack their adversaries with toxic venom—were much more effective than S. amabilis workers—which use their mandibles to cut off foes’ extremities—at killing G. hartmani raiders. The guest ants were also significantly less likely to be killed by the raiders. What’s more, some raiders daubed in venom by guest ants were later attacked by members of their own raiding party, suggesting that M. symmetochus venom is both toxic and somehow confuses the G. hartmani ants.

When the ants interacted on fungus garden fragments in the lab, the guest ants remained more effective at killing raiders than their hosts, who needed much larger numbers to mount any counter-attack against even just one or two raiders. Because G. hartmani usually attack with a force of 100 or more, the researchers concluded that hosting a guest ant colony would likely have substantial fitness payoffs for M. symmetochus if the risk of raids was high.

Adams and colleagues also showed that even when the raiders could not directly interact with guest ants, they preferred to initiate attacks on colonies without M. symmetochus compared to those with the guests. This suggested that the very presence of guest ants, communicated by the volatile chemicals they emit, deters G. hartmani.

“They’re still parasites because they’re extracting resources,” said Adams. “But in the context of this scenario, [the parasites] use the same chemical weaponry that helps them to invade the host colony against this other raiding species.” Adams compared M. symmetochus workers to the Medieval mercenaries that protected cities for pay.

To Herber’s mind, the work provides a neat illustration of how coevolved relationships can be transformed from purely parasitical to partially mutualistic. “Most—if not all—mutualistic interactions evolved from a parasitic relationship,” she said. “So how do we get from parasitic to mutualistic? Well, this [study] shows us one way.”

Mehdiabadi added that the study also emphasizes the importance of considering all the players influencing such coevolutionary arms races. “A mutualism doesn't involve two mutualists in the absence of other organisms, and a host-parasite interaction doesn't involve only the two and no others. All players need to be studied, and their interactions need to be examined.”

Adams said her team now plans to investigate whether the same results can be found in the field. The researchers also want to see if another socially parasitic ant species from the same genus, Megalomyrmex adamsae—named after Adams, who discovered the species—also protects its fungus-farming hosts.