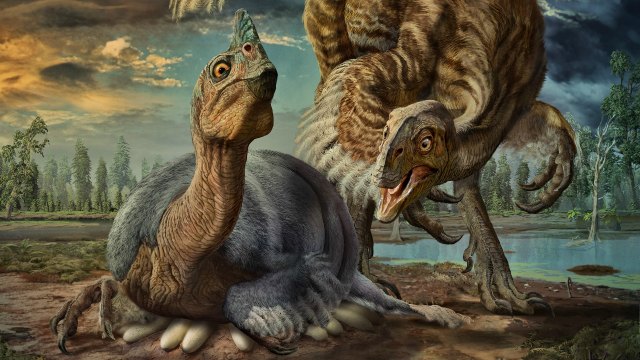 A nesting gigantic cassowary-like dinosaur named Beibeilong in the act of incubating its eggs. ILLUSTRATION BY ZHAO CHUANGAt the end of 1992, a farmer named Zhang Fengchen unearthed a nest of enormous dinosaur eggs—each the length from his elbow to his fingertips—in the Henan Province of central China. This nest contained a rare fossilized embryo, which was later smuggled to the United States, featured on the cover of National Geographic, sold to a museum in Indiana, and finally, after a lengthy search process, returned to its homeland.

The remarkable story of this specimen now has another chapter. Researchers reported today (May 9) the first scientific characterization of this fossil, revealing the identity of the embryo as a new species of giant oviraptorosaur, which the researchers named Beibeilong sinensis, meaning “baby dragon from China.”

Beibeilong was previous known as Baby Louie. The dinosaur got its name from the National...

The embryo was first spotted when Zhang’s nest—at this point, a block of rock with some eggshells poking out—found its way to the U.S. in early 1993 when it was purchased by the Stone Company, based in Boulder, Colorado. Carefully removing layers of mineral, Stone owner Charlie Magovern revealed the rare skeletal embryo that lay within. After a gestation period of more than 65 million years, Baby Louie was born.

In the hopes of identifying the creature, the Stone Company happily shared its find with scientists. It was in 1994 that study coauthor and University of Calgary paleontologist Darla Zelenitsky, then a graduate student, first laid eyes upon Baby Louie.

“As paleontologists working on the fossil, we knew it was a really important specimen,” Zelenitsky said. “We also knew it was from Henan, China, and in order for us to publish on it we wanted to see it go back to a museum there.” 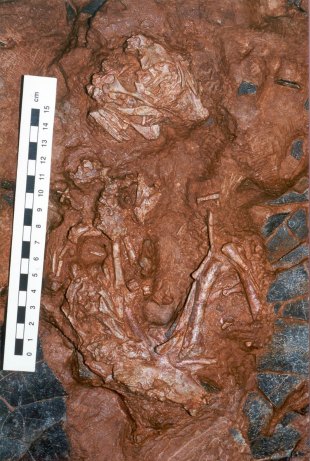 Curled embryo of Beibelong on top of the eggs (eggshell is dark gray in color)PHOTOGRAPH BY DARLA ZELENITSKY, UNIVERSITY OF CALGARYWhat made the Baby Louie skeleton significant was its rarity. To date, there are only two other known giant oviraptorosaur fossils, Zelenitsky said, and embryonic skeletons are rare in general.

Rather than return the specimen directly to China, Baby Louie was first acquired by the Indianapolis Children’s Museum in 2001.

According to museum spokesperson Kimberly Harms, it was important to transfer the specimen from private to public hands. The acquisition process involved lawyers, lengthy red tape, input from the museum’s international paleontology advisory board, and collaboration with Chinese government authorities.

The museum always intended  to repatriate the specimen to China, Harms said, but finding a suitable facility was a lengthy process.

When the Henan Geological Museum openened in 2008, it seemed like a natural fit because it was located in the province where the fossil was originally discovered. Baby Louie finally joined the permanent collection there in 2013, and only then did Zelinitsky feel she could resume her preliminary 1990s studies of the fossil’s identity.

What she and her colleagues described today in Nature Communications is that Baby Louie is not only a rare example of a giant oviraptorosaur, but likely an entirely new species, Beibeilong sinensis.

The team differentiated Beibeilong from its cousin Gigantoraptor, first described in 2007, by comparing developmentally-conserved anatomical features, such as the relative sizes of the mandible and femur.

According to Thomas Holtz, a paleontology lecturer at the University of Maryland, there’s nothing alive today that’s comparable to Beibeilong, but if the species were alive today anyone who saw it would immediately think “bird.” Playing off a famous phrase applied to a smaller oviraptorosaur, Holtz described Beibeilong as “a chicken from Hell on steroids.”

Beibeilong dinosaurs had toothless beaks and were covered head to toe in feathers. In fact, they were the largest feathered animals ever to live, Holtz said. They had longer necks than other bipedal dinosaurs and the slender legs of a runner.

They also likely sat on their nests like birds, Zelenitsky said. Giant oviraptorosaur nests tended to form a ring of eggs about three meters in diameter with room for a parent in the center. Researchers have uncovered smaller species of adult oviraptorosaur skeletons perched in the middle of their own ring-shape nests, preserved for all eternity in the midst of their parental incubation duties.

Unlike modern birds, however, Beibeilong was enormous—tall enough to peer into a two-story window—and possessed long, grasping hands, which are among the largest nature has ever produced, Holtz said. They were also omnivores, which is uncommon for such a large animal. The only living large omnivores are bears and hippopotamuses.

Baby Louie kept these secrets for decades after its initial discovery. Although questionable exportation practices are a tempting scapegoat for this scientific delay, Zelenitsky painted a more nuanced picture of the process.

“I think the length of time that it took in some ways was beneficial to the project,” Zelenitsky said, “because there were a lot of specimens found after the Baby Louie or the Beibeilong specimen that helped us realize what it was.”