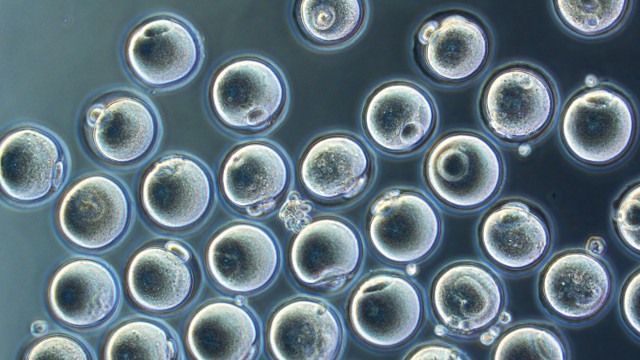 “This is truly a crowning achievement,” said oocyte biologist David Albertini, director of the Center for Human Reproduction in New York City, who was not involved in the work.

“It’s remarkable that . . . in vitro eggs from mouse stem cells used for reproduction,” Dieter Egli, a regenerative medicine specialist at the New York Stem Cell Foundation and Columbia University who was also not involved in the study wrote in an email to...

In mice, oocytes are derived from primordial germ cells (PGCs), which form around day 6.5 of embryonic development. In female embryos, the PGCs make their way to what will turn into the ovary and enter meiosis to form primary oocytes, which begin to mature following puberty. Previously, Katsuhiko Hayashi of Kyushu University in Japan and colleagues  reported the ability to differentiate murine ESCs and iPSCs into PGC-like cells—a process that takes about five days in vivo—that could then develop into oocytes when transplanted into adult mice. The researchers also showed that mouse-derived PGCs can be used to produce fertile oocytes in the lab.

In the present study, Hayashi and colleagues have now extended their culturing technique to encompass the entire embryonic stem cell to oocyte differentiation, which takes about 30 days in vivo.

By three weeks of growth in culture, the team observed primary oocytes in meiosis prophase I within structures that resembled secondary follicles. One of the key components at this stage, according to Albertini, was the need to add an estrogen inhibitor to get the early stage oocytes to build ovarian follicles in vitro.

The researchers then added follicle-stimulating hormone and two other factors to the medium and separated each follicle-like structure—inside which oocytes continued to grow for 11 more days—resembling full-size germinal vesicle oocytes. In the third phase, the germinal vesicle oocytes were cultured for one day in maturation culture medium to become meiosis II–arrested oocytes.

“The stumbling block for a long time that this research group finally managed to overcome is coordination of the female germ cell development with its somatic environment at every step along the way,” said Albertini.

Amander Clark, who studies germline development at the University of California, Los Angeles, and was not involved in the work, agreed. “The key seems to be the interaction with the embryonic niche cells, which surprisingly does not require transplantation.”

“The most surprising moment was when I saw a clump of secondary follicles in the reconstituted ovary, with beautiful individual follicle structures,” wrote Hayashi in an email to The Scientist.

Testing the quality of the meiosis II–arrested oocytes, the team found that about 78 percent had the correct number of chromosomes. Then, using RNA-sequencing on pooled oocytes, the researchers observed expression in the culture-derived oocytes comparable to that of meiosis II oocytes derived from in vivo adult and newborn pup ovaries. here were 424 genes that were either up- or downregulated compared to in vivo-derived meiosis II oocytes, particularly, mitochondrial function genes, the researchers reported.

To test whether the lab-cultured meiosis II oocytes were fully functional, Hayashi’s team fertilized the oocytes with wild-type sperm in vitro, and implanted the embryos into surrogate females, which resulted in healthy pups that were slightly heavier compared to wild-type pups but that developed normally and were fertile at 11 months.

Still, according to Hayashi, because the pups from in vitro generated oocytes were healthy and grew into fertile adults, some of the in vitro cultured oocytes are as potent as in vivo-derived ones. Hayashi cautioned that it is too early for any clinical use of lab-grown oocytes. “We still need to do basic research using mouse and nonhuman primates to refine the culture conditions.”

A limitation of the technique is the need for gonadal somatic cells derived from mouse, which is not possible if this technique is tried to produce human in vitro oocytes.

For Egli, the study is still a motivator for similar attempts with human stem cells—“where the real impact will be.” However, Egli cautioned that thus far, there are no data to suggest that this would work in the more-complex human system.

Albertini agreed. “Mice have relatively simple ovaries compared to humans and make pups relatively easily. The significance of this work is as a great research tool to study the molecular and cellular control of oogenesis.”

“This work is a game-changer,” wrote Clark. “However, there is still important work to do in figuring out why the in vitro eggs are not as high as quality as eggs made naturally in vivo.”