In addition to our annual dedications to topics of cancer and neuroscience, this year The Scientist focused four issues on areas of life-science research that were ripe for broad and in-depth review. In March, we covered The Origin of Life, focused on an ever-mysterious time in which the planet birthed living organisms from nonliving entities. In back-to-back issues over the summer, we published The Food Issue followed by a book focused almost entirely on the act of Sex. And in October, we published the fourth issue in our annual series on the senses: Making Sense of Sight. (We will complete the five basic senses in 2015, with an issue dedicated to hearing.)

Here’s a look back at The Scientist’s 2014 special issues:

The Origin of Life (March) 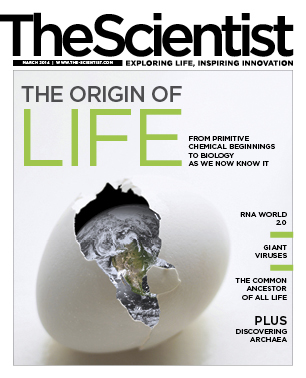 Sometime around 3.5 billion years ago, something changed on Earth, giving rise to the planet’s first life. How...

Elsewhere in the book, Didier Raoult, director of the Research Unit on Infectious and Emerging Tropical Diseases at Aix-Marseille University, France, discusses how the recent discovery of giant viruses is challenging the current classification of life; astrobiologist and geophysicist David Waltham reconsiders the uniqueness of Earthly life in the context of the planet’s history of life-friendly weather; and Oberlin College’s Aaron David Goldman discusses what bioinformatics and systems biology can tell us about the last common ancestor of all living things. Reported stories include a look at Carl Woese’s discovery of archaea in the late 1970s; hints that mat-forming microbes existed 3.5 billion years ago; and profiles of origins-of-life researchers Matthew Powner and Roger Summons. 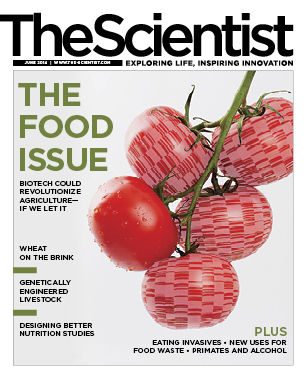 The Scientist’s editors had little trouble coming up with interesting stories to fill our June issue, focused on food. From genetically modified organisms to food safety, the planet’s growing populace demands that science step up to feed the world. In Designer Livestock, we discuss how researchers are developing food animals that are resistant to disease or more environmentally friendly, among other beneficial qualities, but decades of public and political resistance to genetically engineered organisms have stalled several projects in their tracks. The wheat community, too, remains strongly against such genetic engineering techniques, preferring to use traditional breeding strategies to develop crops that can resist the most devastating pathogens, we report. As one group of researchers points out, wild relatives of today’s food crops could hold the genetic diversity necessary for improving production.

Other interesting tidbits from this issue include a report on how drinking green tea may boost the activity of DNA repair enzymes; how eating invasive carp could help prevent the fish from taking over the Illinois River and other waterways of the Midwest (see also this TSLive video on this intriguing solution); and the possibility of genetic engineering harmful toxins out of barley and beer. And one topic that’s a must-have in any food-focused issue, a discussion about the ever-contradictory findings of nutrition studies and how they can be improved, from Stanford University’s Christopher Gardner and Michael Stanton. As this month’s profilee and long-time nutrition researcher Bruce Ames says, “Nutrition is a muddy field, but I like getting into muddy fields.” 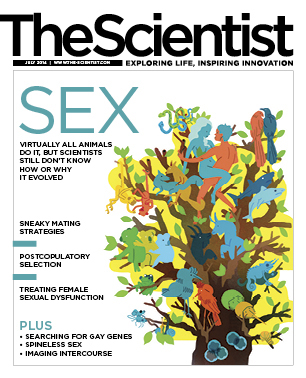 Who doesn’t love a good sex story? The July feature well included an overview of the post-copulatory strategies of both males and females in the evolutionary game of sexual selection, by University of Massachusetts Amherst research Patricia L.R. Brennan; a discussion of why sex even exists, given the physical, biochemical, and genetic costs associated with the practice; and a survey of the diverse species in which males not only bully their way to mating, but also sneak around and mimic female looks and behavior, as well.

Did I mention we had fun with this one? 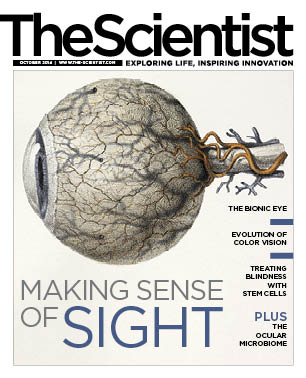 In our fourth annual issue dedicated to a sense, we delve into the biological phenomenon of sight. The Bionic Eye, penned by researchers in the business of developing neuroprostheses to help patients see, discuss how the field has advanced by leaps and bounds, with current technologies sensing light and converting the information to a signal that can be interpreted by the brain, much like cochlear implants do for deaf individuals. In a second feature dedicated to this sense, we report on the evolution of color vision in primates, which involved one fortuitous genetic event after another.

Stem cell therapeutics for vision disorders showing promise in early-stage trials are the subject of the month’s Biobusiness article; the Literature section covers retinal glial cells that serve as optical fibers, the role of microRNAs in the function of mouse cone cells, and the visual cortex’s response to sound. (See also this Online First story on the ocular microbiome: the eye, contrary to conventional wisdom, is not sterile, but harbors a diverse microbial community, just like the rest of the body.) Finally, read about William Briggs’s 17th-century theory of optic nerve architecture, and modern-day vision researcher John Dowling’s career studying the neural architecture of the retina.