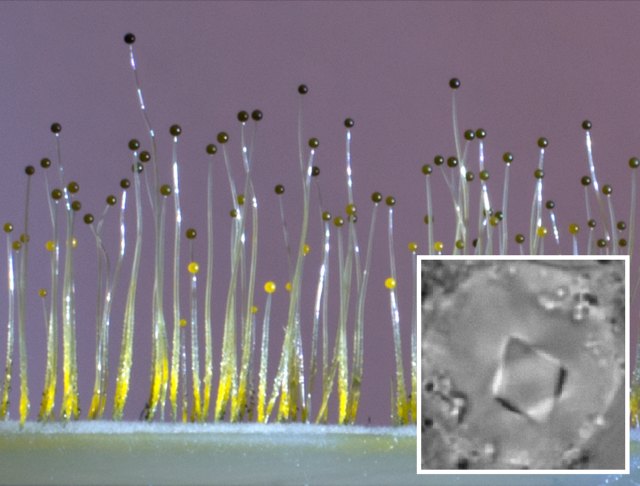 Phycomyces fruiting bodies with spore-containing spheres at their tips. Inset: An OCTIN crystal, 5 microns acrossTU ANH NGUYENWhen food runs low, the pin mold fungus, Phycomyces blakesleeanus, sends out spindly fruiting bodies topped with spores. The fungus grows in dung, and needs to figure out which way is up to spread its spores and reproduce. The trick it evolved is to sense gravity using large protein crystals that fall to the bottom of cell vacuoles. Just how the fungus acquired this ability was a mystery, but new research published in PLOS Biology today (April 24) shows that it originated in bacteria, which, curiously, can’t form these large crystals.

The genetic gift that encodes the crystals is an unusual case of what’s known as horizontal gene transfer (HGT), an exchange of DNA between organisms, says Sara Branco, a mycologist at Montana State University who was not...

It kind of flips upside down our general perception of why horizontal gene transfer is happening.—Jason Slot,
Ohio State University

Earlier work by scientists discovered the Phycomyces solution for sensing gravity in 1999, but the evolutionary origin of the crystals remained unclear. In this latest study, cell biologist Gregory Jedd and his team of the National University of Singapore and the Temasek Life Sciences Laboratory set out to find the crystals’ source. They purified the protein building block, which they named OCTIN, and sequenced its gene, octin. Comparing the fungal octin to DNA from other organisms, the researchers found that it is most closely related to the octin of a group of bacteria, suggesting that the fungus had acquired the gene through HGT.

It was clear to Jedd that if indeed OCTIN originated in bacteria, they weren’t using it in the same way modern fungi do. Most obviously, bacterial cells are simply too small for the protein to crystallize and fall to the bottom of cell vacuoles, so OCTIN couldn’t have had a gravity-sensing role there. That meant the fungal use of OCTIN must have evolved after fungi acquired the gene. “It kind of flips upside down our general perception of why horizontal gene transfer is happening,” says fungal ecologist Jason Slot of the Ohio State University who was not involved in the study.

To find out what OCTIN does in bacteria, the team expressed the octin gene from acidobacterium Terriglobus saanensis, a relative of the bacterium thought to be the octin donor, in E. coli. The group found that the protein assembles into nanostructures that share some features with the fungal OCTIN crystal. “While these structures are orders of magnitude smaller than fungal OCTIN crytals, these results suggests that bacterial OCTIN was predisposed to evolving into the gravity-sensing novelty,” Jedd says.

In fungi, the proteins are made in the endoplasmic reticulum, transported through the cell’s secretory pathway, and assembled into crystals in the vacuole. So how does the cell prevent premature assembly of the crystals? The team discovered that the Phycomyces crystals contain two proteins of different sizes, both coded for by the same octin gene. “What that tells us is that the full-length protein is proteolytically processed to make these two forms,” Jedd says. Importantly, the protease is contained in the vacuole but not anywhere else, thus preventing premature crystal assembly.

The role of OCTIN in the ancestral donor remains a mystery, as does the initial advantage the OCTIN protein gave the early fungi who acquired it, notes Branco. Perhaps the little nanostructures provided a rudimentary gravity-sensing ability. Or “maybe there were other functions that could have been conferred to the fungi in the beginning that would have enabled their differential reproduction,” she says.

Intriguingly, Jedd’s team also discovered that Oomyces, or water molds, independently acquired OCTIN from another group of bacteria. The researchers are looking into whether OCTIN evolved a gravity-sensing function there—or a different function entirely.

Correction (April 25): The article originally stated that biologist Paul Galland is a physicist. We have removed his name in the third paragraph and instead linked to the paper he coauthored. The Scientist regrets the error.