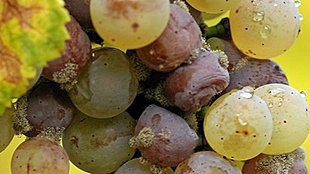 Botrytis cinerea on Riesling grapesWIKIMEDIA, TOM MAACKStrike, counter-strike, and so on, ad infinitum. The relationship between pathogens and their hosts is a never-ending, continuously evolving battle. And scientists have now discovered that one plant pathogen even hijacks its host’s defense system for its own use. According to a report published online today (October 3) in Science, the gray mold fungus, Botrytis cinerea, deploys small, non-coding RNAs (sRNAs) that subvert the plant’s silencing machinery, forcing it to suppress the expression of host immune system genes.

“We know we’re always going to see defense and counter-defense,” said David Baulcombe, a professor of plant sciences at Cambridge University, who was not involved in the work. “But what is novel about this one is that . . . the counter-defense system is firstly an RNA molecule, which is new, and secondly . . . it moves from a fungal to a...

Hailing Jin, a professor of plant pathology and microbiology at the University of California, Riverside, who led the new study, was intrigued to discover that a fungus uses RNAs to attack plants. She had been searching for sRNAs induced upon infection, but had assumed that they would be produced by the plants themselves. After all, RNA silencing, in which sRNAs bind to protein-coding messenger RNAs and suppress their expression, is a mechanism used by plants to inhibit the activity of invading foreign genes. “I was focusing on the plants’ immune responses against pathogens,” she explained, “so I was looking at plant endogenous small RNAs that are induced by pathogen infection.”

But she found that a small proportion of the infection-induced sRNAs were “a 100 percent match to the Botrytis sequence,” she said. “It was a surprise to us.”

Of 832 Botrytis sRNAs that Jin found were induced upon infection of tomato or Arabidopsis plants, 73 were predicted to silence genes of the host plants. Jin focused on three particular sRNAs whose targets were indicated to be mRNAs involved in both plants’ immune responses.

The ultimate confirmation that the fungal sRNAs target and suppress the host plants’ immune system genes, however, would be “to test whether a plant engineered to express alleles of the [target] genes that are refractory to the action of the [fungal] small RNAs are more resistant, ” said Jonathan Jones, a plant scientist at The Sainsbury Laboratory in Norwich, UK, who did not participate in the work. Not only would this be “the acid test of their hypothesis,” he said, it could point to an effective disease-control strategy for agricultural use.

And coming up with resistant plants could be extremely lucrative. Botrytis cinerea, or gray mold, attacks more than 200 species of fruit and vegetables, and causes billions of dollars of damage worldwide each year, said Jin.

Although Botrytis is  costly and destructive, the fungus does have one saving grace. It rots grapes to a degree that’s perfect for producing exceptional desert wines, such as Sauternes—hence the pest’s other name: nobel rot.  Jones said the new findings suggest  “that, heaven forefend, Botrytis is genetically manipulating the grapes before we drink them.”