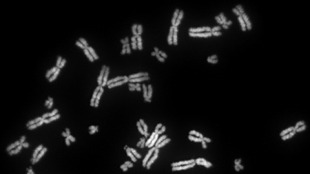 Schizophrenia and fragile X syndrome both can involve problems with cognitive function, and two studies published in Nature Neuroscience earlier this week (August 4) identify a gene that may underlie the neurodevelopmental problems associated with the diseases. The gene, topoisomerase 3β (TOP3β), encodes an enzyme that interacts with FMRP, a protein that causes fragile X syndrome when mutated, and the researchers suspect that the proteins’ interactions promote normal cognitive development.

“They add a plausible mechanism and additional support to the growing understanding of the role of fragile X in a broad range of neurodevelopmental diseases,” said Richard McCombie, a geneticist at Cold Spring Harbor Laboratory who was not involved in the study.

Nelson Freimer, a geneticist and psychiatrist at the University of California, Los Angeles, zeroed in on TOP3β while doing a study on the genetics of residents of Northern Finland....

When Freimer and colleagues scanned the genomes of Northern Finnish people for deletions, they found that a small deletion in chromosome 22 had an elevated frequency compared to in the rest of the Finnish population. Within that deletion was TOP3β.

Michael Ronemus, a geneticist at Cold Spring Harbor Laboratory who was not involved in the study, said in an email to The Scientist that TOP3β was “almost certainly” a schizophrenia gene, though the results must now be replicated in a more diverse population, he noted.

Meanwhile, Weidong Wang of the National Institute on Aging and colleagues began to investigate TOP3β for its effects on life span in mice and discovered a connection between the gene and fragile X syndrome, an X-linked genetic disorder that leads to intellectual impairment and can be a genetic cause of autism. When the researchers purified TOP3β, they found that it formed a heterodimer with the protein FMRP and another protein, called TDRD3, with TDRD3 forming a bridge between FMRP and TOP3β. Freimer’s group independently confirmed the association.

Wang and colleagues hypothesized that FMRP mutations could be causing the intellectual development problems associated with fragile X syndrome by disrupting FMRP’s ability to interact with TOP3β and TDRD3.  Specifically, the researchers suspected that TOP3β was an RNA topoisomerase, untangling RNA and aiding RNA metabolism. TOP3β’s sister protein TOP3α belongs to a class of enzymes called DNA topoisomerases that help untangle knots in DNA by creating and repairing breaks in DNA strands. Indeed, TOP3β localized to areas associated with RNA processing and bound mRNAs associated with neurodevelopment. Furthermore, the researchers directly demonstrated that TOP3β does have at least some RNA topoisomerase activity. “It specifically can work an RNA circle into a knot,” said Wang.

When Wang and colleagues mutated TOP3β in fruit flies and mice, the animals developed problems in forming synapses. Moreover, when TOP3β was mutated, fruit fly synapses expressed reduced levels of the schizophrenia-associated protein tyrosine kinase 2, whose mRNA has been shown to be a binding target both of TOP3β and of FMRP. Wang and colleagues hypothesize that TOP3β regulates the translation of proteins important for neurodevelopment through its topoisomerase activity.