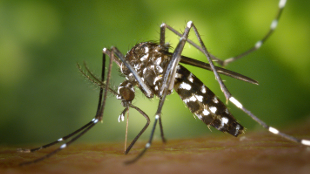 Aedes albopictusCDC PUBLIC HEALTH IMAGE LIBRARYHuman infections caused by the vector-borne chikungunya virus spiked around 2004, thanks to a mutation in the virus that enabled Aedes mosquitoes to transmit it. Since then, chikungunya has been circulating in countries near the Indian Ocean and recently spread to the Caribbean. Last month, a Florida man was the first to be infected with chikungunya on US soil.

The virus has been able to cover new ground across the globe because of a complex interplay of factors, researchers from the Pasteur Institute in Paris show in a paper published today (August 13) in Proceedings of the Royal Society B.

“This study demonstrates that the transmission of chikungunya, a mosquito-borne disease that is spreading quickly on a global scale, depends strongly on local mosquito populations and mean environmental temperature,” entomologist Courtney Murdock at Pennsylvania State University who was not involved with...

In an effort to measure the “vector competence”—the ability of a vector to become infected and transmit the pathogen—of different mosquitoes, the Pasteur Institute’s Karima Zouache and her colleagues reared Tiger mosquitoes (Ae. albopictus) from six different localities, three tropical and three temperate. “This species is a public health concern and can transmit 26 viruses, including chikungunya and dengue,” said Zouache. The researchers then infected 940 mosquitoes with two strains of the chikungunya virus, and incubated them at two temperatures: 20°C—the lowest recorded during an epidemic—and 28°C—the tropical average.

Once a mosquito is infected with chikungunya, the virus first replicates within its midgut before traveling to the head region. It later invades the salivary glands, at which point the mosquito becomes infectious.

Further analyses revealed that this three-way—gene-gene-environment—interaction was especially critical at a key time point: when the virus moved from the mosquito’s head to its salivary glands.

In an e-mail to The Scientist, William Reisen, a professor emeritus of pathology, microbiology, and immunology at the University of California, Davis, noted that the study raised important questions about the mosquitoes’ genetics. “Mosquito origin had the greatest effect in [the researchers’] analyses,” he wrote. “This can provide information on possible adaptations, especially to the cold.”

“There are other factors that can affect vector competence, but environmental temperature will likely have a strong impact on mosquitoes because, like other insects, mosquitoes are ectotherms,” noted Murdock. “Thus, temperature variation will have a large influence on mosquito physiology, development rates, longevity, and reproduction, all of which shape a mosquito’s ability to transmit disease.”

According to Zouache, her team’s results could be relevant to public health. “A high density of Ae. albopictus in temperate regions can enhance the risk of infection of mosquitoes through imported cases,” she said. “Efficient monitoring of both Ae. albopictus density and imported cases returning from endemic areas is essential to prevent chikungunya epidemics in Europe; and this survey is needed even at lower temperatures.”

Clarification (August 14): This article has been updated to clarify that chikungunya virus infections in humans first reached epidemic proportions around 2004.