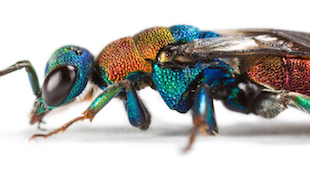 Gold wasp, Hedychrum nobileOLIVER NIEHUIS, ZFMK, BONNUsing an unprecedented quantity of genetic sequence information from insects, researchers have assembled a new phylogenetic tree showing when these invertebrates evolved and how they are related to each other. The tree suggests that insects evolved approximately 479 million years ago, around the time when plants colonized land, and that insects are most closely related to cave-dwelling crustaceans. The new study, published today (November 6) in Science, also confirms some previously suspected family groupings.

“The results of this work are immense and will be broadly adopted in general and systematic entomology books and textbooks,” Jakub Prokop, an entomologist at Charles University in Prague in the Czech Republic who was not involved in the study, wrote in an e-mail to The Scientist.

David Grimaldi, curator of insects at the American Museum of Natural History in New York, said that the...

The study authors, who are part of an international consortium working on the 1K Insect Transcriptome Evolution (1KITE) project, began their work in 2011 in hopes of using newly available sequencing technology to clarify insect relationships previously only investigated using morphological evidence or smaller molecular datasets. They sequenced transcriptomes from 103 insect species distributed across all living insect orders. They also drew data from previously published whole-genome sequences of 14 arthropod species, as well as from transcriptomes of 27 additional species. They then narrowed down their genetic data to 1,478 protein-coding genes that are present in all of the species analyzed.

By comparing differences and similarities between the sequences of these protein-coding genes, as well as the sequences of amino acids the genes encode, the researchers were able to create a tree showing the relationships between 144 insect genuses. This confirmed many relationships, while also drawing some unexpected conclusions, Grimaldi said. For instance, he said it was surprising but plausible that a blind, wingless order called the Diplura is not lumped with another group of similar primitive invertebrates, the springtails, but rather are their own sister group to insects. Less surprising was the finding that primitive crustaceans called Remipedia are the closest non-extinct relatives to insects.

The researchers also sought to nail down the timing of insect evolution by calibrating points on their tree to the ages of 37 fossils. While the earliest fossil insects date to 412 million years ago, the researchers concluded that insects evolved earlier than that, leaving the sea and colonizing coastal environments approximately 479 million years ago (give or take 30 million years). This would have meant that insects colonized land around when plants did. “In my opinion, the concordance between insect colonization of terrestrial ecosystems and the earliest plants is really one of the most significant [discoveries],” said Prokop.

The paper also suggests that insects took flight about 406 million years ago, more than 80 million years before winged insects become abundant in the fossil record, and that parasitic lice diversified 53 million years ago, just around or after the time of the extinction of the dinosaurs. It was previously suspected that these animals first appeared on feathered theropod dinosaurs 130 million years ago, then later switched to birds and mammals.

Not everyone was convinced by the dating. “Some of these early lineages I think are excessively old,” Grimaldi said. He said that the researchers were overly strict in excluding fossils whose dating did not meet their standards when they calibrated their tree.

Bernhard Misof, an evolutionary biologist at the Zoological Research Museum Alexander Koenig in Bonn, Germany, and a coauthor on the study, said that exploration of the genetic dataset his team generated is not finished. While the researchers only used sequence data for a subset of protein-coding genes, all of the genetic data they generated is openly available for researchers to use. And going forward, scientists will be able to refer to the relationships outlined in the tree as investigate questions about when and why various insect traits evolved.

“The major goal was to sort out what was plausible and robustly supported . . . and what should be discarded,” Misof said. “We provide a backbone tree of insects.”