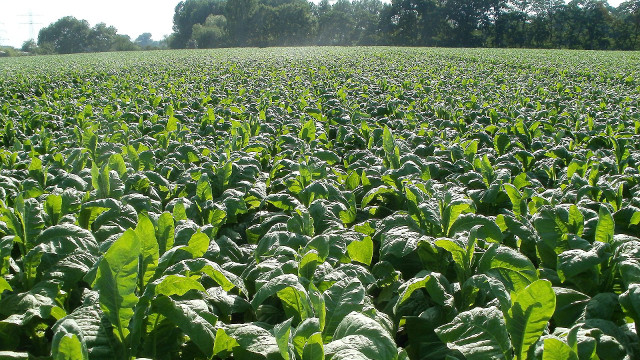 Tobacco fieldWIKIMEDIA, ANRO0002Speeding up a plant’s response to fluctuations in light intensity can enhance its photosynthetic yield, according to a paper published today (November 17) in Science. The authors, who genetically engineered tobacco plants to react more rapidly to sudden switches between light and shade, report an approximately 15 percent improvement in the modified plants’ productivity.

“The paper is a really very nice breakthrough. It’s the first instance where it has been possible to demonstrate that, by improving the efficiency of photosynthesis, there is an increase in yield under field conditions,” said plant scientist Christine Foyer of the University of Leeds, U.K. “I would say it’s a game-changer.”

The United Nations’ Food and Agriculture Organization has predicted that by 2050 the world will need to produce 70 percent more food than it does currently. Along with improving storage, transport, and preservation of foods to minimize losses, increasing...

The problem is, “there’s been almost a plateau in many crops in terms of the yield increases using current breeding technologies,” said Foyer. “It was clear that we had to use a new approach.”

Photosynthesis—the conversion of sunlight energy into biomass—is one of the oldest biological processes on Earth, and is arguably “the most important,” said Long. Indeed, it creates the planet’s oxygen, as well as food. Because evolution has been shaping photosynthesis for so long, “there has been a lot of skepticism as to whether [tweaking] it can do anything for crops,” Long said.

But “if you really get in and drill down into the process of photosynthesis, you see a lot of places where the system is not as efficient as it might be,” said Robert Blankenship, a photosynthesis researcher at Washington University in St. Louis. After all, he added, “evolution doesn’t make things perfect, it just makes them good enough to survive.”

One example of such less-than-perfect efficiency is a process called nonphotochemical quenching (NPQ), a mechanism that protects plants from the damaging effects of overly intense light. Specifically, NPQ dissipates excessive light excitation energy as heat to prevent the over-excitation and destruction of antenna complexes—chlorophyll-containing, light-responsive structures critical to photosynthesis. But, when light intensity drops, explained Long (when a cloud covers the sun, or when one leaf shades another, for example), NPQ is slow to switch off. This means that excitation energy continues to be diverted even when not in excess. Computer modeling has shown that this lag could reduce a plant’s potential carbon uptake by “anything between eight and 40 percent,” said Long.

Long and colleagues thus planned to increase the speed with which NPQ switches on and off. To do this, they over-expressed in tobacco plants the three main genes controlling NPQ: two encoding the enzymes violaxanthin de-epoxidase and zeaxanthin epoxidase, and one encoding the protein PsbS—a subunit of the photosystem II antenna complex.

The team used tobacco because it is a technically amenable crop, said Long, explaining that food crops such as rice, soy, and cassava, would be the ultimate targets.

Using real time measurements of NPQ response speed (by chlorophyll fluorescence analysis) and of carbon dioxide uptake (by infrared gas analysis), the team observed that both processes were significantly increased. And these improvements translated to a 14 percent to 20percent  increase in dry weight per plant in field conditions.

“It’s impressive what they did,” said Blankenship, adding that “there are a lot of other ways [to tweak photosynthesis] that might possibly have even bigger impacts,” such as expanding the spectrum of light that plants can use.

Indeed, agreed Foyer, “there are many steps along the process of photosynthesis where it is possible to see that improvements could be made to increase yield. And what Steve Long and his colleagues have done is to tackle just one.”

With this advance, she added, “the 70 to 100 percent increase in yield that we desperately need by 2050 is looking much more like a reality now.”