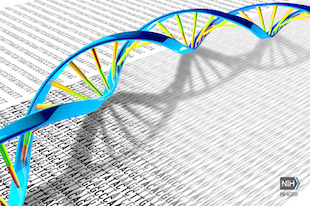 NHGRI, DARRYL LEJAMost genomic studies to date have focused on linking mutations to diseases. Taking a new approach, researchers studying the genomes of apparently healthy individuals identified some people who seem to be resilient to severe genetic disorders that are known to crop up during childhood. Of the 589,306 human genomes they analyzed, researchers from the Icahn School of Medicine at Mount Sinai in New York City and their colleagues identified 13 people who carry mutations for certain genetic disorders but do not appear to have the associated diseases, according to a study published today (April 11) in Nature Biotechnology.

“It’s a really interesting study because what we consider pathogenic [is] not necessarily the case,” Eric Topol, the director of the Scripps Translational Science Institute who was not involved with the study, told The Scientist. There have been several reports of people with severe, pathogenic mutations who...

“If you wanted to find clues to prevention,” study coauthor Stephen Friend, president of the nonprofit Sage Bionetworks and a geneticist Mount Sinai, said during a press briefing, “instead of looking at people with disease, you would want to look at individuals who should have gotten sick.”

For the present study, Friend and colleagues analyzed existing data from 12 genetic studies worldwide (including data collected by consumer genetics company 23andMe), looking at 874 genes in 589,306 genomes. They started with more than 15,000 resilient candidates, but after a stringent weeding-out process, the researchers identified 13 adults who had mutations for eight different severe childhood genetic disorders—including cystic fibrosis, Smith Lemli-Opitz syndrome, and familial dysautonomia—yet had no reported signs of the diseases.

Friend and colleagues chose to study severe childhood disorders because it increased the chance that individuals with known disease mutations were past the age at which they would have developed symptoms of the disorder (were they going to). But the concept of resilience could apply to other diseases as well, Friend said.

The findings add to evidence that some individuals with known disease-causing mutations may have genetic protection against certain disorders.

“The aim of the project is to identify protective factors (most likely genetic variants) that prevent the appearance of a severe disease in an individual who would otherwise be expected to have the disease because they carry one or more disease-causing variants,” Eric Evans, chief scientific officer of San Francisco-based genetic-testing company Counsyl who was not involved in the work, wrote in an email to The Scientist.

While this study was an important initial effort, the consent rules for some of the genetic study populations prevented the researchers from recontacting the 13 people identified as resilient. Without following up with these individuals, it’s impossible to confirm whether their DNA matched their medical records, that they had not been diagnosed with the disorder, and that they did not show mosaicism (a condition in which a person’s cells contain a mixture of several genotypes), the researchers noted.

The next step is identifying the mechanisms that confer resilience in some individuals. As Topol put it: “Why are they ‘bullet-proof?’”

Two of the people found to be resilient to the genetic diseases studied had a disease-causing version of the DHCR7 gene that has been linked to Smith Lemli-Opitz syndrome. Interestingly, both had additional DHCR7 variants, including five that are known to be benign.

However, the amount of genome that was sequenced varied widely among studies included in this analysis, so Friend and colleagues didn’t have sufficient coverage to search for mutations in other parts of the other resilient individuals’ genomes that might protect them against the disease phenotype.

If mutations in a second gene that block the action of the first mutation can be found, “they could possibly lead to the development of therapies for these diseases,” Evans noted. “However, it’s important to note that there is a long and uncertain path from what we know today to the development of such a therapy.”

Correction (April 19): The reference at the end of this article initially misnamed the first author, and has been fixed. The Scientist regrets the errror.