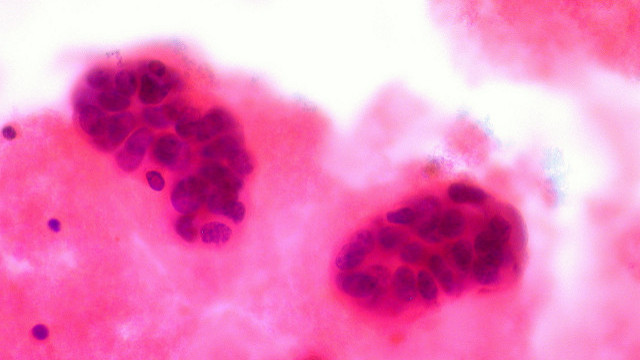 Metastatic breast cancerFLICKR, ED UTHMANTwo studies published today (October 23) document a slew of common genetic variants that correlate with an increased or decreased risk of developing breast cancer. For one study, published in Nature, researchers considered the genotypes of more than 100,000 breast cancer patients and a similar number of cancer-free controls at genetic loci across the genome and found 65 new genetic variants associated with cancer risk. The second study, published in Nature Genetics, used similar methods but only included patients with the rarer estrogen-receptor–negative breast cancers; this study identified 10 new variants, three of which overlapped with the first study. Researchers hope that these variants will help doctors to better predict a woman’s breast cancer risk based on her genome.

“Underlying cancer susceptibility is very complex and probably involves many, many dozens if not hundreds of underlying susceptibility alleles,” says Timothy Rebbeck,...

In addition, the new findings could shed light on the underlying biology of breast cancer, Rebbeck says. “The variants that are identified identify genes and pathways and biological mechanisms that allow us to understand how breast cancers arise.”

Breast cancers fall into one of two categories: those that contain estrogen receptors (ERs) (ER-positive cancers) and those that don’t (ER-negative cancers). ER-positive breast cancers are more common and more well studied, and they come with a better prognosis than ER-negative cancers, explains Douglas Easton, an epidemiologist at the University of Cambridge in the U.K. who led the Nature study and is a coauthor on the Nature Genetics paper. For the Nature study, which included both ER-positive and ER-negative cancers, Easton and his team genotyped some 60,000 breast cancer patients and nearly 50,000 cancer-free controls using a chip called the OncoArray, which assesses samples for single nucleotide polymorphisms (SNPs) across the entire genome, but with a particular focus on areas thought to relate to cancer. They pooled this OncoArray data with that from other studies, bringing the total number of cancer cases up to about 100,000 and the total number of markers analyzed to about 11 million.

Researchers had known that first-degree relatives of a breast cancer patient have twice the risk of women without a family history of breast cancer. The 65 newly identified variants explain about 4 percent of that heritable breast-cancer risk. Add in previously identified susceptibility variants, as well as mutations in high-risk genes such as BRCA1 and BRCA2, and about 39 percent of the risk is explained, Easton says.

Roger Milne, a cancer epidemiologist at Cancer Council Victoria, who was a leader of the Nature Genetics study and is a coauthor on the Nature paper, emphasizes that these studies screened for relatively common variants found in large numbers in the human population, not for rare mutations. And unlike mutations in high-risk genes, which can dramatically increase the risk of breast cancer, the risk conferred by having the cancer-associated genotype at any one of these risk loci is very small. For comparison, while all 65 new variants together explain 4 percent of familial cancer risk, BRCA1 and BRCA2 mutations alone account for 17 percent of that risk, Easton says.

Because ER-negative cancers are rare, associated genetic variants are harder to identify, Easton notes. “To find the ER-negative hits, you’ve got to really specifically look at ER-negative disease, and you have to try harder, try and get bigger numbers of ER-negative cases.” For the Nature Genetics paper, Easton, Milne, and their colleagues did just that. They started with the same pool of data that went into the Nature paper but looked only at the subset of ER-negative cases. To this subset they added patients with BRCA1 mutations whose data were available from a different ongoing study because BRCA1 mutations are associated with ER-negative cancers. In the end, they identified 10 new variants that could explain about 1.5 percent of the heritable risk of ER-negative breast cancer. Combined with previously identified variants, researchers can now explain 14 percent of that risk.

“Anything we can do to understand ER-negative tumor etiology and the causes of those tumors is really important, and these studies certainly provide new information that will help us address that,” Rebbeck says.

The researchers are now working toward using these variants, along with other factors that influence breast-cancer risk, to better predict breast cancer risk. “If you can differentiate women into groups of sufficiently different risks, you might be able to save more lives,” Milne says. For example, women with different risks could receive tailored screenings, he says. “The idea is the women at highest risk might get more or different screening.”

In addition to applying the findings at the clinical level, Rebbeck emphasizes the need for basic science experiments to follow up on the mechanisms controlled by the newly identified genetic variants. “That’s really where we’re going to learn more about cancer.”