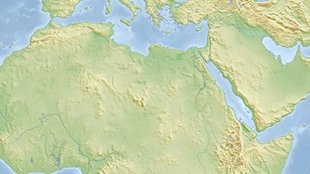 WIKIMEDIA, BAMSEModern human populations expanded out of Africa some 50,000 to 100,000 years ago, but whether the exodus primarily followed a route through North Africa and Egypt, or across the Bab el Mandeb strait to Yemen has been a matter of debate. Now, through an analysis based on sequence comparisons between modern Egyptians, Ethiopians, Europeans, and Asians, researchers from the University of Cambridge and their colleagues suggest that the Northern route is most likely. The results of the study are published today (May 28) in the American Journal of Human Genetics.

“This paper goes much further beyond any of the other prior genetic studies in really trying to address this question [of route],” said human evolutionary geneticist Brenna Henn of Stony Brook University in New York who was not involved in the work. “There are many caveats associated with this type of work but it’s impressive that they...

Europeans and Asians (Eurasians) are, for the most part, fairly genetically homogeneous and thus most likely descended from a single group of modern humans who left Africa, said Luca Pagani of Cambridge who led the study. However, whether these early migrants traveled up the Nile and out of Africa via Egypt (Northern route), or traveled East through Ethiopia to Yemen when sea levels in the Bab el Mandeb strait were lower (Southern route), is unclear. “From an archeological point of view, the evidence so far was in favor of a Southern route,” said Pagani, explaining that stone tools recovered from the Southern Arabian Peninsula support this theory. Furthermore, a prior genetic analysis of mitochondrial DNA suggested that “all Eurasians came from Ethiopia,” he added. Importantly, however, “it doesn’t say that Ethiopia was the last stop.”

Pagani and his colleagues considered that, within the genomes of modern Egyptians, Ethiopians, and non-Africans, there might be clues as to the migration of Eurasian ancestors. To find out, they sequenced the genomes of 100 Egyptians and 125 Ethiopians and compared these sequences to those of more than 200 Europeans, Chinese, and Indians (Eurasians). “The idea is, whatever was the last stop in Africa—whether Egypt of Ethiopia—Eurasians should be most similar to [the people there],” said Pagani.

Because of the myriad genetic exchanges between African and non-African populations over the last 50,000 or so years, simply comparing the whole-genome sequences would not be informative, explained Pagani. Therefore, to eliminate these confounding exchanges, the team identified and then masked the non-African components of the Ethiopian and Egyptian genomes and based their comparisons solely on the African genetic content.

From the sequence analysis, the team was also able to approximate the dates at which the ancestors of modern Eurasians diverged from Egyptians and Ethiopians—55,000 and 65,000 years ago, respectively.

The team’s analyses did not include genome sequences of Papua New Guineans and Australian Aborigines—who, some anthropologists believe, may be the descendents of an even earlier exodus.

“I agree they’ve made a good demonstration here that present day Egyptian samples look closest to the out-of-Africa [Eurasian] people of today compared with Ethiopian samples,” said Chris Stringer of the Natural History Museum in London who did not participate in the study. “But the question is, what’s the likelihood that the people of Egypt from 60,000 years ago are still represented by the genetics of people in Egypt today?”

Stringer suggested that population movements over the millennia may have muddied the genetic waters, just as they have in Europe where recently discovered ancient DNA samples have revealed unexpectedly “huge turnovers and movements of populations.”

“The only way to prove with 100 percent certainty that there has been population continuity in Egypt since 60,000 years ago or more would be to find ancient DNA [there],”said Pagani. However, he pointed out that the Egyptian genomes contain a “clearly detectable African component,” which differs from that of Ethiopians and West Africans and is not shared with Eurasians. “Our parsimonious explanation is that this African Egyptian component is typical of the area,” he said.

The search for ancient DNA samples may be long and fruitless. To bolster Pagani’s findings in the meantime, “I’d like to see them do even more African populations to see whether the pattern still holds up,” said Stringer. “And of course, it would be great now if they could extend [the comparison] to look at Australians and New Guineans to see whether they can pull out two migrations [from Africa] or just one.”