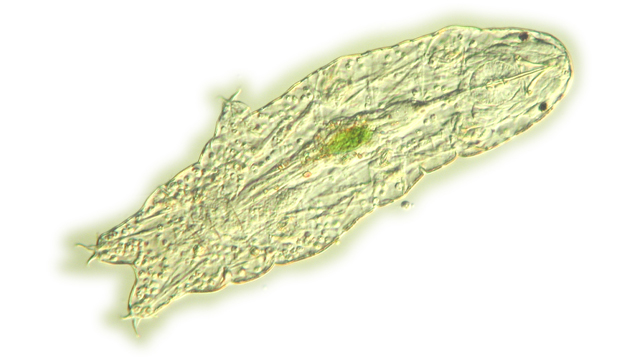 H. dujardini micrograph. The green in the middle is the remains of food algae; the animal is about 200 microns or 0.2 mm.AZIZ ABOOBAKER, EDINBURGHWhere tardigrades belong in the tree of life is a difficult question. Some previous work suggests that these tiny animals that can survive intense environmental challenges are most closely related to nematodes, while other studies and the animals’ morphology point to arthropods as water bears’ nearest relatives.

Now, an international team of scientists has compared detailed genome assemblies of two tardigrade species. While their analysis, published today (July 27) in PLOS Biology, sheds light on water bears’ ability to endure punishing circumstances, it does not resolve their evolutionary history.

“Even the full genomes of two tardigrades, which the authors report here, were not sufficient to decide whether tardigrades were closer to the arthropods or the nematodes,” Thorsten Burmester, a biologist at the University...

Scientists have identified more than 1,200 species of tardigrades living on land, in freshwater, and in marine environments. The animals are no bigger than a grain of salt and look like chubby, bumbling bears with four pairs of legs. Many terrestrial species have the unique capacity to survive without water for years by drying themselves up, only to rehydrate when their environment—often a patch of moss—becomes hospitable again.

Tardigrades “are very small, so they’re quite hard to work with,” says genomics biologist Mark Blaxter of the University of Edinburgh. “The genome is a great way of understanding what’s going on inside the organism and also placing that organism in the context of everything else.” 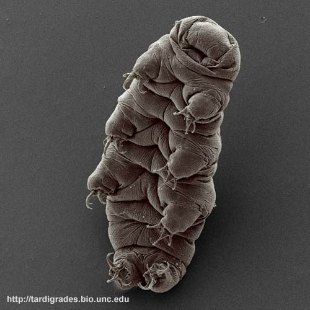 WIKIMEDIA, GOLDSTEIN LAB - TARDIGRADESBlaxter and colleagues wanted to look more closely at the genome of the tardigrade Hypsibius dujardini because previous versions of the animal’s genome told conflicting stories. One assembly suggested large amounts of horizontal gene transfer from bacteria, plants, fungi, and archaea, while others found no such evidence.

The authors began by sequencing genomic DNA of an individual animal and pooled DNA from about 900,000 tardigrades. They also compared their high-quality H. dujardini genome with that of another tardigrade, Ramazzottius varieornatus.

The researchers found that the H. dujardini genome was nearly twice the size of that of R. varieornatus. Their analysis of gene sequences indicated that the tardigrades are most closely related to nematodes, yet an examination of rare genomic changes supported the tardigrade-arthropod relationship.

“The jury’s still out, but I think the likely conclusion will be that tardigrades are members of the arthropods as suggested by their morphology,” says Max Telford, an evolutionary biologist at University College London who was not involved in the work. “Careful analyses will resolve this question ultimately, but it is really challenging.”

The authors also determined that only about one percent of the genes in each genome arrived by horizontal gene transfer, much lower than previous estimates. They hypothesized that this discrepancy was likely due to contamination with microbial DNA in earlier sequencing attempts.

WIKIMEDIA, BOB GOLDSTEIN AND VICTORIA MADDEN, UNC CHAPEL HILLThe levels of horizontal gene transfer detected in the study are much more normal than what had been previously suggested, explains Telford. “In a sense it’s slightly disappointing, but I think there’s a lesson there: it’s good to be suitably skeptical about any extraordinary findings, especially when you don’t know what to expect because it’s a completely new group of organisms.”

The team also sequenced RNA from various developmental stages, active adults, and tuns—the dessicated form that tardigrades enter to survive extreme temperature, pressure, radiation, and drying. Genome and RNA-expression comparisons between H. dujardini, which is able to adopt its tun form only after exposure to gradual drying conditions, and R. varieornatus, which dessicates rapidly, revealed candidate genes and pathways that may play a role in tardigrades’ survival abilities. For instance, the researchers determined that both species’ assemblies showed evidence of genomic expansion of chaperone genes, whose products protect proteins during times of stress.

“The authors found that some genes associated with desiccation tolerance . . . look like they have been horizontally transferred from foreign sources, at least in some species of tardigrades,” Thomas Boothby, a postdoc at the University of North Carolina, Chapel Hill, writes in an email to The Scientist. Boothby did not participate in the work, but studies how tardigrades survive extremes. “One of the more interesting questions this study raises is how and when tardigrades evolved tolerances to different stresses,” he adds.

The most compelling open question for Blaxter focuses on phylogeny and the still unclear relationship between tardigrades, nematodes, and arthropods. “Understanding them is going to be very useful for sorting out the history of life in this bit of the animal tree,” Blaxter explains. “It might seem a bit like bookkeeping, but in fact if we can sort out these relationships, we’ve sorted out relationships of most of the animals on the planet.”