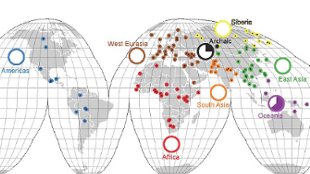 World map with geographic coordinates of populations sampled in the study.PETER H. SUDMANTGenetic differences among ethnically diverse individuals are largely due to structural elements called copy number variants (CNVs), according to a study published today (August 6) in Science. Compared with other genomic features, such as single nucleotide variants (SNVs), CNVs have not previously been studied in as much detail because they are more difficult to sequence. Covering 125 distinct human populations around the world, geneticist Evan Eichler at the University of Washington in Seattle and an international team of colleagues studied the genomes of 236 people—analyzing both SNVs and CNVs.

“The take-home message is that we continue to find a lot more genetic variation between humans than we appreciated previously,” Eichler told The Scientist.

“This is a really exciting study of CNVs in worldwide human populations and has a much finer resolution than what had been...

Classified as deletions or duplications, CNVs are genomic loci that can greatly vary in the number of copies, and are often located in regions of highly repetitive content, making them more difficult to sequence compared to SNVs. Thus far, the vast majority of human genome analyses—including from the Human Genome Project and the 1,000 Genomes Project—have focused on SNVs and CNV deletions; these studies largely overlooked CNV duplications because of technology limitations.

In the present study, the median size of CNVs identified was 7,396 base pairs. “Here, [the authors] put in an extra effort, sequencing each genome much more deeply—about 10 times more than what was done in the 1,000 Genomes Project,” said Alexander Urban a geneticist at the Stanford School of Medicine, who was also not involved in the study. “That is a massive achievement in genomic data generation.”

From their dataset, the researchers were able to reconstruct the organization of an ancestral human genome—around 200,000 years old—and compare it to the chimpanzee and orangutan reference sequences. This comparative analysis revealed at least 40 million base pairs of additional DNA in the ancestral human genome reconstruction that are not found in the current human reference genome. A portion of this sequence was retained in the genomes of several modern African people, suggesting the loss of this additional sequence as humans migrated away from the continent.

Eichler and his colleagues compared the modern human genomes to genomes of three ancient human lineages as well as two extinct lineages—Neanderthal and Denisova. The researchers found that CNVs were a source of seven times greater diversity compared to SNVs.

“While there are fewer CNV events, the number of base pairs that are different between two individuals are largely dictated by CNVs, especially within the duplicated regions,” Eichler explained. This difference between CNVs and SNVs is likely to grow much larger as new sequencing platforms are used to understand human genetic variation, he added.

Specifically, CNV duplications were the source of the greatest diversity; these features were four times more likely to affect genes compared to CNV deletions across all populations, suggesting that selection of the duplications and deletions differed throughout evolution. The researchers also found that CNVs had the greatest effect on genomic diversity among non-African human genomes. The implication, said Eichler, is that during “the last 80,000 years, the genomes of our ancestors that left Africa have gone through much more remodeling by CNVs compared to SNVs,” said Eichler.

Next, Eichler’s team would like to compare specific CNV loci among different modern populations to ascertain positive versus negative selection as well as correlations with disease risk. The study provides clues on how evolution may have acted on different genomic elements, but there’s a lot more to learn, said Lohmueller. “This is a great step in that direction but it’s not the last part of the story on understanding which CNVs in our genomes are neutral or deleterious.”