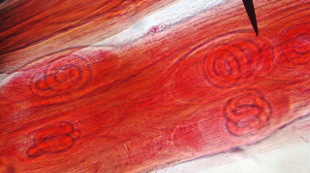 Trichinella spiralis larvae within muscle, Wikimedia, Froggerlaura Bucking the trend among DNA methylators, whose epigenetic marks on the genome tend to be stable over their lifetimes, the parasite Trichinella spiralis accumulates methyl tags over time, according to a study published in Genome Biology last week (October 17). It is also the first nematode found to carry a methylated genome.

“I was actually very surprised, not only because we indeed found DNA methylation in the T. spiralis genome, but also T. spiralis seems to be the only nematode that uses DNA methylation among the eleven nematodes we analyzed,” senior author Liu Mingyuan, a zoonosis researcher at Jilin University, China, wrote to The Scientist in an email. And, he added, it “seems to use DNA methylation in a drastic way.”

During its lifecycle, T. spiralis infects muscle tissue of various mammals, and people can become infected by eating uncooked contaminated meat. Once...

By screening for and sequencing methylated DNA present at newborn, larvae, and adult stages, Mingyuan and colleagues found virtually no methylation during the newborn stage. But in the larval stage, when the worms move from the intestine to muscle, methylation begins to appear, with adult worms carrying the most methylated DNA. “Due to the drastic increase of DNA methylation, some parasitism-related genes were influenced or regulated,” Mingyuan said. The finding is in stark contrast to DNA methylation patterns in other animals, including humans, which generally stay consistent throughout an organism’s lifetime. Some studies have even found that methylation of human DNA decreases with age.

The discovery of T. spirals’s novel use of DNA methylation may provide a new system for probing epigenetic regulation, geneticist Jason Lieb of the University of North Carolina at Chapel Hill wrote in an email to The Scientist. “It may be useful in dissecting the functions of DNA methylation in organismal development or differentiation,” he wrote in the same way that, for example, researchers use honeybee as a model of unique methylation systems. “In that system, there are methylation differences between the queen, workers, and drones.” And because T. spiralis is an easier organism to raise in the lab, it could serve as a more accessible model for study.

Moreover, the study raises the possibility that other nematodes use DNA methylation, too, despite the fact that their most popular relative, C. elegans, doesn’t, said Paul Sternberg, a nematode researcher at the California Institute of Technology. “This is surprising, not shocking,” he said. Indeed, another study published in the same issue of Genome Biology found that a protozoan once believed to have a methylation-free genome does in fact utilize DNA methylation during a certain part of its life cycle. “This is just a good kick in the rear to keep an open mind about all of these mechanisms, and to look harder” for methylation in other species, Sternberg said.