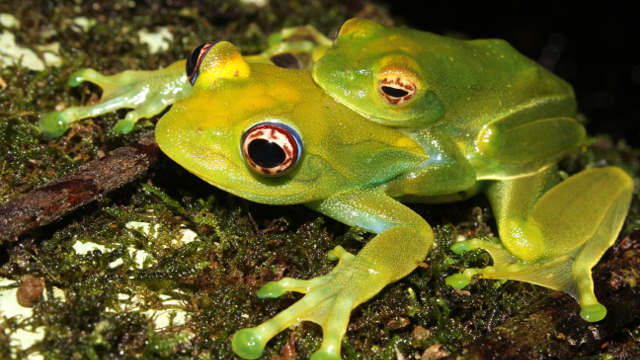 UNIVERSITY OF COPENHAGEN, RICARDO ROCHAAn examination of species-level genetic diversity by researchers at the University of Copenhagen’s Natural History Museum of Denmark provides a global map of intraspecific genetic diversity for two classes of animals—amphibians and mammals. The team’s findings, published today (September 29) in Science, confirm that tropical regions harbor more genetically diverse species and show that the presence of nearby human settlements has diminished genetic diversity within the amphibian and mammalian species studied.

“The results support earlier findings, but the very large sample size in this study represents a substantial advance,” Len Gillman of the Auckland University of Technology in New Zealand who was not involved in the study wrote in an email to The Scientist. “It suggests that tropical species have a greater potential for speciation than temperate species [and] supports the hypothesis that differences in diversity across the globe are, at least to some...

The researchers pulled publicly available genetic sequence data on amphibian and mammal species, comparing cytochrome B sequences for the mitochondrial DNA (mtDNA) that included geographic information (about 27 percent of available mammal sequences examined, and 38 percent of amphibian sequences). This gave them almost 93,000 mtDNA sequences to work with, covering some 4,700 species. The researchers then analyzed the genetic diversity within small geographic patches and found that genetic diversity within species followed the familiar pattern of species richness.

“Although we knew already before that tropical areas were quite rich areas in terms of numbers of species they harbor, what we are detecting here is that not only are these areas rich in the number of species, but they also harbor populations of species that are more diverse,” said study coauthor Andreia Miraldo, a postdoc at the Natural History Museum of Denmark.

The researchers also found that the presence of humans tamped down the amount of intraspecific genetic diversity. Genetic diversity was highest among animals the wildest, most remote areas sampled, and lowest near large settlements.

“Each species has its own story to tell—of how populations are connected, how they survived changes in the environment,” said study coauthor Katharine Marske of the University of Copenhagen. “When we zoom out, we can see the story of the Earth. Basically, it lets us take these patterns that are inherently local and we can scale out.”

But not all parts of the globe have the same number of sequenced genomes. Huge tracts of Asia, Africa, and South America remain under-sampled, the researchers noted.

Even for locations that do have abundant genetic information, challenges remain.

For one, scientists’ understanding of existing species is imperfect. “These higher rates of [genetic] diversity in tropical species might actually reflect . . . cryptic species,” said phylogeographer Rayna Bell of the Smithsonian Institution’s National Museum of Natural History in Washington, DC. Cryptic species are multiple species that are mistakenly classified as a single one. Until researchers have a better picture of the true number of species, this confusion will skew our understanding of intraspecific diversity, added Bell, who was not involved in the present study.

Another complication is that mtDNA diversity varies across species. “MtDNA diversity is higher in rodents than in artiodactyls (pigs, hippos, and ruminants), on average,” Nicolas Galtier of the University of Montpellier in France, who was not involved in the current study, wrote in an email. “If researchers have studied rodents more than artiodactyls in one place, and the reverse in another place, this is likely to generate spurious geographic patterns.” Including nuclear DNA in the analysis could help, Galtier suggested.

For now, the study’s authors provide a baseline with which to monitor future changes in genetic diversity, said Miraldo. “It’s a snapshot in time.”