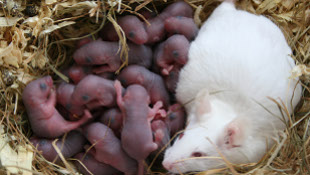 WIKIMEDIA, SEWERYN OLKOWICZ The effects of malnutrition in the late stages of a female mouse’s pregnancy can produce epigenetic changes in the sperm of her male offspring. While prenatal undernourishment had previously been shown to result in metabolic disease for two subsequent generations, a study published today (July 10) in Science is the first to demonstrate the extent to which an expecting mother’s nutrition can affect the methylation of DNA in the germ cells of her offspring.

“This is a fairly compelling demonstration that the epigenome is plastic to some extent, able to be modified by the environment,” said Oliver Rando, who studies epigenetic inheritance at the University of Massachusetts Medical School, but was not involved in the work. “This is probably one of the more expansive demonstrations of this.”

Geneticist Anne Ferguson-Smith from the University of Cambridge in the U.K., along with endocrinologist Mary-Elizabeth Patti at the Joslin...

When these first-generation males—who were fed regular diets—were bred with control female mice not exposed to malnutrition while in the womb, these germline hypomethylated regions were not transmitted to the second generation. However, some of these same regions in the brains and livers of second-generation male fetuses showed differential expression compared to controls.

“These methylation differences [in the first-generation male sperm] are likely to have an impact on transcript regulation [in the second generation], but the methylation markers themselves do not persist in the grandchildren,” said Patti.

“There is a lot of interest in the impact of maternal nutrition on offspring metabolic disease but few studies have specifically examined the impact of maternal under-nutrition on sperm methylation—or examined the consequences [in grandchildren],” Margaret Morris of the University of New South Wales in Sydney told The Scientist in an e-mail. “It is interesting that the methylation changes were not maintained in the [second generation’s] offspring.”

Even though both male and females within a litter are affected by their mother’s nutrition during pregnancy, focusing on the male offspring allowed the team to understand how a single nutritional exposure of a mother during pregnancy affects her sons’ epigenome and whether that son can pass on this nutritional exposure—just through his sperm—to his offspring. Looking at daughters and granddaughters is more complicated because the female has more ways to transmit nutritional states to her offspring including through the egg, the mitochondrial DNA, maternal metabolism, and even the structure of the uterus, Patti explained.

“This is a really detailed and well-controlled study that increases our knowledge of the potential mechanisms of intergenerational transmission,” said Amanda Drake, a pediatric endocrinologist at the University of Edinburgh who was not involved in the work.

Some of the hypomethylated regions identified were in proximity of genes related to insulin secretion. Consistent with previous studies, both the first- and second-generation males had lower birth weight and reduced pancreatic function, plus showed signs of glucose intolerance. Low birth weight human babies resulting from extreme nutritional deprivation during pregnancy are also at higher risk for metabolic disease, including obesity, type 2 diabetes, and cardiovascular disease, said Patti.

Still, “the question of whether these methylation changes [in the first generation] are responsible for the metabolic changes that show up in these mice is now the million dollar question,” said Rando.

According to Ferguson-Smith, the team is now investigating whether third-generation mice have any phenotypic or epigenetic memory from the nutritional insult that their great-grandmothers experienced.

That nutritional exposure is important both during pregnancy and after birth is clear. How changes in nutrition during these two states affect offspring can now be addressed using both in-utero and post-weaning mouse models, said Rando. “Comparing these two models to understand metabolic responses is going to be extremely illuminating.”