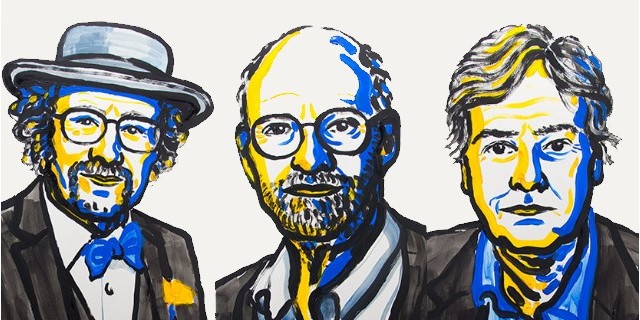 Jeffrey Hall, Michael Rosbash, Michael YoungNOBEL MEDIA. III. N. ELMEHEDThe 2017 Nobel Prize in Physiology or Medicine has been jointly awarded to Jeffrey Hall, Michael Rosbash, and Michael Young for their work on circadian rhythms. The trio is recognized for research on the period gene in Drosophila—a central regulator of the circadian clock whose discovery led to the identification of such genes in humans and other animals—plus the protein machinery governing the timing of biological rhythms.

In the course of their research, collaborators Rosbash and Hall at Brandeis University and Young independently at Rockefeller University, “solved the mystery of how an inner clock in most of our cells in our bodies can anticipate daily fluctuations between night and day to optimize our behavior and physiology,” Thomas Perlmann, secretary general for the Nobel Assembly and Nobel Committee, says in a statement.

Retired since 2008, Jeffrey Hall was at Brandeis University from 1974, where he took an early interest in the biology of circadian rhythms in Drosophila. His initial work with period showed that the gene played an important role in regulating the rhythm of courtship song cycles produced by male fruit flies (PNAS, 77:6729-33, 1980).

Hall later began collaborating with Brandeis colleague Michael Rosbash—a neuroscientist he got to know primarily through sport, colleagues say. The pair went on to isolate the period gene—which had been described in the 1970s by Seymour Benzer and Ronald Konopka—and showed that it produced a protein, PER, that cycles on a daily rhythm (Cell, 39:369-76, 1984). Rockefeller’s Michael Young and colleagues simultaneously isolated period, publishing the findings in Nature the same year (312:752-54).

These are the people who gave us our first working model of how the molecular clock might tick.—Russell Foster,
University of Oxford

The research laid the groundwork for other researchers to map similarly essential circadian genes in mice and other animals. “What’s extraordinary is that the basic building blocks of the clock discovered in flies are very similar in mice and humans,” says Foster. “It’s broadly the same genes and broadly the same proteins.”

The trio went on to pin down the details of the protein machinery governing circadian rhythms. Working with postdoctoral researcher Paul Hardin, Hall and Rosbash showed that mRNA transcripts from the period gene also cycle, allowing the PER protein to regulate its own production via a feedback loop (Nature, 343:536-40, 1990). “It was a great experience working as a postdoc,” Hardin tells The Scientist, adding that he is pleased and not overly surprised about today’s news. “Their work for a number of years has merited an award of this magnitude. I was so happy to hear the news this morning.”

Young, meanwhile, discovered a number of other genes influencing period protein dynamics. In 1994, his group identified timeless, a clock gene that produces a protein, TIM, that binds to PER, and is required for the latter’s entry into the nucleus to regulate period gene expression (Science, 263:1603-6). A few years later, the team described another gene, double-time, which regulates the accumulation of the period protein (Cell, 94:83-95, 1998). “He’s just a terrific scientist,” says collaborator Brian Crane, a biochemist at Cornell University. “His impact is huge. I figured that sooner or later this would happen, but it’s nice to see it materialize.”

It’s not the first time the laureate trio has been recognized for contributions to biology and the research into human circadian rhythms that has followed. In 2009, the Gruber Foundation awarded the Neuroscience Prize to Hall, Rosbash, and Young for the establishment of “a direct link between genes and behavior” that could later be extended beyond fruit flies into humans and, indeed, “all living organisms.”

In 2012, the three were recognized again with the Canada Gairdner International Award for pioneering science’s understanding of the circadian rhythm. “The medical relevance of these findings has become apparent as it was found that changes in these clock genes are associated with a series of sleep disorders in humans,” Young said in an interview at the time. “There are strong indications that some forms of depression are linked to the control of circadian rhythms.”

All three have made an impression inside and outside the lab. “Being in the room with them, you realize you have to keep concentration to keep up with the discussion,” notes Michael Hastings, a molecular neurobiologist working on circadian rhythms at the University of Cambridge, who sees both Rosbash and Young frequently at research gatherings. “[They have] an enormous intellectual appetite and curiosity.”

On announcing the prize, Rosbash’s first response to the news of the award this morning was “you are kidding me,” Perlmann told the audience. “That’s a classic Michael response,” Hardin says. “He’s quite the jokester.”

Update (October 2): The article has been updated to include reaction from Brian Crane.