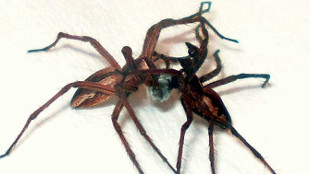 Male (right) and female (left) Pisaura mirabilis spiders grabbing the nuptial gift during matingMARIA ALBOFor the spider Pisaura mirabilis, sex and a meal make a great deal. During courtship, the male presents the female with a food item—called a nuptial gift—and as she feeds, he deftly transfers his sperm into her. However, females will also accept males without gifts. Why, then, should males bother?

Because the fate of his sperm depends on it.

A new study, published in Proceedings of the Royal Society B: Biological Sciences last week (October 23), reported that P. mirabilis females prefer sperm from males with gifts and store more of those gametes. Maria Albo and her colleagues at Aarhus University in Denmark counted sperm retained in newly mated P. mirabilis females and the number of eggs that hatched. Some male partners presented nuptial gifts, while others did not. Accounting for the effect...

“Cryptic female choice is notoriously difficult to demonstrate, but the authors did that by keeping other influences on sperm transfer constant, such as copulation time,” Marie Herberstein, an associate professor at Australia’s Macquarie University who studies spider behavior but was not involved in the present study, wrote in an e-mail to The Scientist. The only alternative explanation, she said, is that “gift-giving males produce more sperm than non-gift giving males,” but as yet there is no indication that this is the case.

During sexual reproduction, females typically expend more resources than males to produce offspring. In some cases, costly reproduction has made for choosy females: they tend to pick their mates. Some females can even mate with several males, store the received sperm in a bag-like organ called the spermatheca, and then choose whose sperm to use.

“Cryptic female choice only makes sense for females with multiple mates,” Luiz Ernesto Costa-Schmidt, who studies nuptial gifts at Universidad Nacional de Córdoba in Argentina, wrote in an e-mail to The Scientist. Such females can “prioritize sperm of one male over another.”

So males must convince females to mate. One strategy is to tempt the female with an item she cannot resist; for P. mirabilis females, that would be a nutritious snack, such as insect prey. One of several spider species to use nuptial gifts, the P. mirabilis male wraps the food with silk into a sphere. He then offers it to the female and, as she reaches for it, maneuvers into position and transfers his sperm into her. Females can make off with the gift, so his reflexes must be quick and his grip tight. It is a battle of speed and might.

“Copulation time is always controlled by females and depends on gift presence and size. Females consume the gift during mating, so a bigger prey results in a longer copulation time,” Albo told The Scientist in an e-mail. The longer the two are mating, the more sperm the male can transfer. Despite his efforts, the female has the final say—and she most often favors the sperm from males with gifts.

Nuptial gifts may make a male’s sperm more valuable because they reliably indicate a healthy, well-fed male. “Previously, we found that male condition is reflected in their ability to hunt and produce a gift packed in silk,” Albo said. Starved males struggled to wrap prey in silk, and often chose to eat the prey instead, whereas males bearing nuptial gifts were more likely effective hunters and could afford to give up a meal.

However, conclusive evidence of direct correlation between gifts and the male’s hunting ability remains to be found. More importantly, Pavol Prokop, an associate professor at the University of Trnava in Slovakia who has studied nuptial gifts in P. mirabilis, noted in an e-mail, “whether hunting abilities are heritable requires further studies.”

Still, no matter the evolutionary reasons, P. mirabilis males will continue giving nuptial gifts. If sex is a contract, the males are aware of the case made clear by females: no meal, no deal.