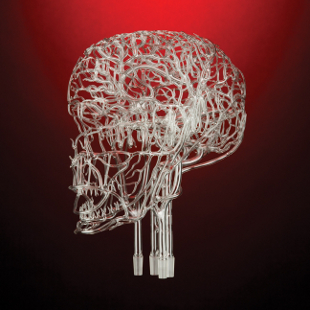 Courtesy of Farlow’s Scientific GlassblowingAt first glance it looks like an ornate crystal sculpture—the sort of priceless ancient artefact that Indiana Jones might risk life and limb to save for posterity. Get a little closer, though, and this intricate arrangement of glass tubes reveals itself as an accurate replica of the brain’s labyrinthine vascular system. In fact, it’s part of a range of anatomically precise models used by cardiologists for training, and by medical device manufacturers to test their latest life-saving catheters and valves.

Every one is made by hand (and mouth) at Farlow’s Scientific Glassblowing (FSG), a family-run company in Grass Valley, California, where the age-old art of glassblowing meets the rigorous requirements of modern medical science.

There, skilled glassblowers painstakingly shape and fuse each individual artery, vein and capillary from borosilicate glass, adding connectors at the exposed ends so their clients can hook the models up to...

“Most of our products are custom made to specification, and they take a while,” says Wade Martindale, manager of the vascular models division at FSG. “With the brain model, for example, I can work on one of those for two weeks. A full [body] model can take a month and a half. It’s intense work, but the end result is satisfying.”

Martindale’s career as a scientific glassblower began when he was 13, after his mom sent him to work for his uncle, Gary Farlow, during the summer holidays. He was immediately hooked. The company was focussed on regular scientific apparatus at the time. But when Martindale began working full time in 1994, customer interest in glass tipping dies, balloon moulds, and rudimentary heart models—“like valentine hearts with a bunch of squiggly lines inside”—was developing into a stream of requests for increasingly detailed vascular models. 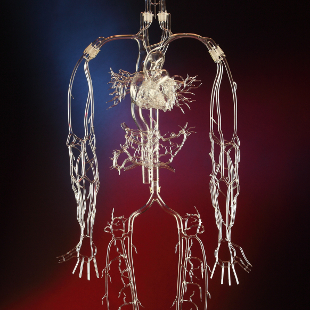 “We started developing these complex, anatomically correct models, mainly by working with doctors, and working from CT scans and medical illustrations,” says Martindale. To go from detailed plans to glass models is no mean feat, however, especially with the accuracy required for scientific use. “Its not 3-D printing; a lot of the most detailed work is done freehand, so it’s tough.”

Now, with almost two decades of experience, Martindale and his team have the process down pat. “You need years of training to make models that will impress the doctors,” Martindale says.

And clients are impressed. Researchers at Edwards Lifesciences in Irvine, California, for example, regularly ask FSG to supply models built to custom specifications. “[They are] mainly utilized by our R&D team as one of several ways to test the company’s delivery systems for transcatheter heart valves,” says Stanton Rowe, chief scientific officer at Edwards. “The models simulate natural vasculature, which allows the team to observe how the delivery systems behave in those environments.” The glass structures are “ideal” because they’re transparent, “and the rigid environment ensures that the device does not alter the geometry of the model, ensuring that testing is repeatable. This is very useful for comparative analysis of varying prototypes, which allows the engineers valuable insights to optimize design.” 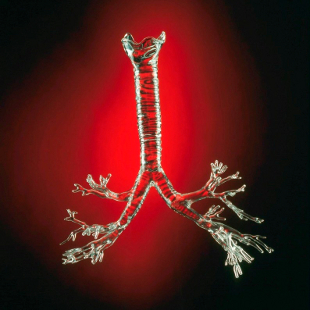 Courtesy of Farlow’s Scientific GlassblowingAli Hassan, MD of Catharos Medical Systems in Campbell, California, is another satisfied customer. He uses a model of the main coronary tributaries—the great and middle cardiac veins—to simulate hemodynamic conditions with realistic flow and pressure. The model “provided an excellent medium for video and image documentation during medical device tests, showing the position and behavior of the device…,” Hassan wrote in a testimonial on FSG's website.

FSG’s intricate glass creations have also caught the attention of artists, one of whom commissioned a vascular model of a child in the lotus position—to be submerged in mineral oil for an exhibition in New York City. “That turned out great,” says Martindale. Despite his appreciation for their artistic value, however, Martindale fears his creations are too delicate to exhibit in his own home. “I would love to have one on display, but I think my kids would destroy it.”