Astrocytes, star-shape glial cells in the brain, were once simply considered support cells for neurons. However, neuroscientists have recently realized they have many other functions: studies have shown that astrocytes are involved in metabolism, learning, and more. In the latest study to investigate astrocytes’ roles in the brain, researchers confirmed these cells played a key role in regulating mouse circadian rhythms. The team’s results were published today (March 23) in Current Biology.

“Recent results have indicated that [glia] are actively modulating synaptic transmission, the development of the nervous system, and changes in the nervous system in response to changes in the environment,” said coauthor Erik Herzog, a neuroscientist at Washington University in St. Louis. “So circadian biologists recognized that the system that we study in the brain...

In 2005, Herzog’s team published a seminal study linking glia to mammalian circadian rhythms. By investigating rat and mouse astrocytes in a dish, the researchers discovered that these glial cells showed circadian rhythms in gene expression.

Since then, several independent groups have reported evidence to suggest that astrocytes help regulate daily rhythms. However, linking astrocytes to circadian behaviors in mice remained difficult. “I had several folks in the lab over many years [who] were unable to find the tools that would allow us to answer the question definitively: Do astrocytes play a role in scheduling our day?” Herzog recalled. “Then, within the last year or so, some new tools . . . became available for us.”

For the present study, Chak Foon Tso, a graduate student in Herzog’s lab, used CRISPR-Cas9 to remove Bmal1, an essential clock gene, in astrocytes of the suprachiasmatic nucleus (SCN)—the master regulator of circadian rhythms—in mice. This resulted in the lengthening of the mice’s daily behavioral rhythms by around an hour. It also disturbed the rhythms in the expression of PER2, another key circadian gene. The team replicated these findings using another approach, which involved tagging genes with sites for removal through DNA recombination.

The group also investigated whether manipulating astrocytes would affect mice with a mutation in the gene encoding for Casein kinase 1, which has been shown to speed up circadian clocks. By removing this mutation specifically from astrocytes, the researchers were able to restore normal rhythms in mice. “[These results] suggests that the astrocytes are somehow talking to the neurons to dictate rhythms in the brain, and in behavior,” Herzog told The Scientist. 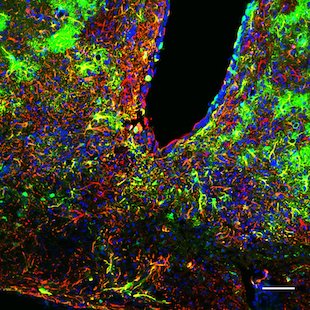 The study “is technically very strong, and I think the results are extremely important in the context of what we already know about the regulation of circadian rhythms and behavior by astrocytes,” said Rob Jackson, a neuroscientist at Tufts University School of Medicine in Boston, who was not involved in the study. “It’s quite interesting that astrocytes form elements of the circuits driving rhythmic behavior, in animals ranging from flies . . . to mice. It really is probably a very general mechanism.” Jackson’s group was the first to report in vivo evidence showing that astrocytes were required for the regulation of behavioral rhythms in fruit flies.

The particulars of the mechanism remain an open question. According to a paper published in Neuron this month (March 8), glutamate—a key excitatory neurotransmitter—may play a key role. Michael Hastings and colleagues at the MRC Laboratory of Molecular Biology in the U.K. showed that, in the SCN, neurons and astrocytes displayed a yin and yang–type arrangement in their activities. The team found that neurons were most active during the day, while astrocytes were most active in the evening, when glutamate levels also peaked.

The authors proposed a potential model for astrocyte-neuron interactions: at night, astrocytes release high levels of glutamate, which damps the overall electrical activity in neurons by causing them to release GABA, an inhibitory neurotransmitter. During the day, astrocytes become less active and release less glutamate, allowing the neurons to become active once again. “From our perspective, glutamate is the factor that links the astrocytes to the neurons,” Hastings told The Scientist. “What we don’t know is what links the neurons to the astrocytes, so we’re only completing one part of the circle.”

“Both labs have shown that the clock in astrocytes is important,” said Jackson. “The work by [Hastings and colleagues] has been able to delineate a neuronal pathway through which astrocytes regulate behavior and molecular rhythms.”

Other groups have found that GABA itself could also play a role. As Olga Barca-Mayo, a postdoc at the Istituto Italiano di Tecnologia in Italy, and colleagues reported in Nature Communications last month (February 10), removing Bmal1 in murine astrocytes disturbed the circadian rhythms through GABA signaling.

“We know that astrocytes are controlling many signals—and the two signals that have been identified from the other labs, GABA and glutamate, seem to be important in regulating rhythms in the SCN,” Herzog said. “It’s also clear that the astrocytes control other signals, for example, ATP.” Identifying those signals and determining how they control different circadian outputs are two questions his lab seeks to address, he added.

According to Mark Zoran, a neurobiologist at Texas A&M University who was not involved in the studies, this work can help researchers better understand multiple conditions that are linked to circadian rhythms, including seasonal affective disorders, sleep disorders, and even some neurological diseases. “We now have another cell type to focus on in the brain that could be an important target . . . for potential treatments,” he said.

Herzog added that understanding the circadian rhythms of astrocytes could help improve treatment for glia-associated brain tumors, such as glioblastoma mutiforme (GBM). “The idea that [astrocytes] have their own intrinsic timing suggests that they may also have daily rhythms in sensitivity to treatment,” he said. “We may be able to optimize outcomes in treating things like GBM by considering time of day.”