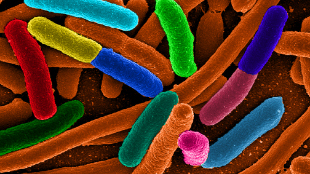 WIKIMEDIA, MATTOSAURUSOne of the biggest concerns about genetically modified organisms (GMOs) is that they can infiltrate wild populations and spread their altered genes among naturally occurring species. In Nature today (January 21), two groups present a new method of containing GMOs: by making some of their essential proteins reliant upon synthetic amino acids not found outside of the laboratory.

“What really makes this a valuable step change is that kill switches beforehand were very susceptible to mutation or other conditions, such as metabolic cross feeding, from basically inactivating them,” said Tom Ellis, a synthetic biologist at Imperial College London who was not involved in the studies. The new approach circumvents some of those problems by making it extremely unlikely for the genetically modified bacteria to be able to survive outside of the conditions dictated by their custom-designed genomes.

Both research teams—one led by George Church at Harvard Medical...

“Here, for the first time, we’re showing that we’re able to engineer a dependency on synthetic biochemical building blocks for these proteins,” Isaacs told reporters during a conference call.

Both teams found that the cells perished in environments lacking the synthetic amino acid. Although the technology is not ready for industrial-scale deployment, the scientists suggested that such an approach could be applied as a safeguard against the escape of GMOs.

“It really addresses a long-standing problem in biotechnology, by engineering a really compelling solution to engineering biocontainments or biological barriers that limit the spread and survival of organisms in natural environments, and along the way also endow these organisms with new and expanded biological function,” added Isaacs.

Dieter Söll, a Yale chemist who also works on genetic recoding, said the method “led to tremendous stringencies in terms of biocontainment. . . . If this is done, let’s say, with three different essential proteins you can really get a stringency that I thought earlier was not possible to get.” Ellis added that such a system could also be combined with other kill switches to establish additional layers of safety.

GROs are resistant against multiple viruses, Church noted during the call, and fail at horizontal gene transfer—one of the ways genetically engineered DNA could migrate into a natural population.

Although the basic concept was similar between the two studies, each used a different synthetic amino acid and focused on different essential proteins. The GROs Church and Isaacs designed were not optimized for any particular application. For use in, say, dairy starter cultures, the system would have to be engineered in Lactobacillus instead of E. coli, for instance, and undergo additional safety testing. “We could redo this very easily with another compound,” said Church.

The next step for Church’s team is to build a GRO that has not one replacement codon, but seven. “Once this gets to a different enough genetic code there will be a barrier unlike any that’s ever existed in the kingdoms of life,” he said.