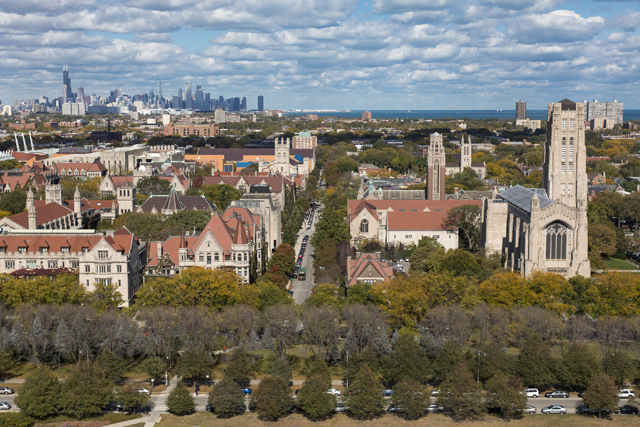 An aerial view of the University of ChicagoTOM ROSSITER, UCHICAGO CREATIVE AND UNIVERSITY COMMUNICATIONSIn a National Labor Relations Board (NLRB) election last October, University of Chicago graduate students voted to authorize Graduate Students United (GSU) as their collective bargaining representative. Last week (February 14), the union reversed course. GSU announced that it has now withdrawn from the federal review process to have legal certification behind its negotiating authority, and is instead seeking recognition of the union directly from the university.

“The reason we withdrew is because even before we voted in the election in October the university administration filed a request for review with the [NLRB] challenging our status as workers,” says sixth-year evolutionary biology graduate student Daniela Palmer, who is a GSU departmental organizer. “There’s a high likelihood that the [NLRB] would, in the near future, have heard that request, so basically that jeopardized our...

On top of concerns about the administration’s challenge to the union status, politics is weighing in on the decision. The NLRB—a federal agency that supervises employees’ right to organize—has five board members who are nominated by the US President and approved by Congress. Since President Donald Trump took office, he has appointed two board members and awaits confirmation of a third.

Since their confirmations, the President’s “appointees moved quickly to undo a number of pro-worker decisions that were made under the Obama administration,” according to GSU’s announcement. The GSU statement also highlights the likelihood that a Trump appointee–dominated NLRB will overturn the 2016 NLRB decision declaring that graduate student workers at private universities are employees and revoke their certificate of representation. In an email to The Scientist, the NLRB’s press office says it does not have a comment.

The union for graduate employees at New York University received voluntary recognition in December 2013, and is still the only graduate union at a private university to have done so.

“There is a political element,” says Paula Voos, a labor economist at Rutgers University who studies the effect of graduate student unionization. “There are certainly other examples of voluntary recognition of different types in US history, so I expect it to be a strategy that graduate students elsewhere decide to do in the face of an NLRB that’s getting less welcoming in terms of employee rights, given the Trump appointees to the board.”

Georgetown University’s union, Georgetown Alliance of Graduate Employees (GAGE), also asked for voluntary recognition from the university on November 1 of last year. “We cannot count on the NLRB to uphold their previous decision, so a private election” is our preference, says Luca Soldiani—a fifth-year PhD student in the computer science department who has been involved with GAGE since its beginnings in February 2017. He tells The Scientist that university administrators initially disagreed with the NLRB assessment that graduate workers are employees, but that they recently seem to have reconsidered.

Matt Hill, a Georgetown University spokesperson, writes in an email to The Scientist that discussions between the university and the union began in January “towards the goal of entering into a private election agreement that recognizes that our graduate students’ relationship with the university is fundamentally an educational one, while also responding to some graduate students’ desire to have a stronger voice in our continuing work to create conditions under which they can flourish.”

If Georgetown student workers hold a private election, it will be only the second of its kind. The union for graduate employees at New York University (NYU), Graduate Student Organizing Committee/United Auto Workers (GSOC/UAW), received voluntary recognition from NYU in December 2013, and is still the only graduate union at a private university to have done so.

“There were costs to voluntary recognition,” Anne Pasek, GSOC/UAW Communications Committee Co-Chair and a fourth-year PhD candidate in the department of Media, Culture, and Communications at NYU, tells The Scientist. “STEM [research assistants] are not included within the span of our contract, for example, because this looked like an insurmountable difference of opinion on the part of our administration,” she explains, adding that the process also included years-long fights for recognition and a contract.

It is not yet clear what the end result at the University of Chicago will be. “The union election outcome last October indicated that a large number of graduate students believe that the University should do more to support them. I unequivocally agree, and we will start this process immediately,” Provost Daniel Diermier wrote in a message to the university community last week.

“The university is committed to working with graduate students and faculty to improve graduate education and graduate student life,” University of Chicago spokesperson Marielle Sainvilus writes in an email to The Scientist.

“We’re seeing that universities are and can be responsive to their students,” says Palmer. The university administrators “acknowledge that we’re seeking better conditions, so I hope that that means that we can come to some sort of agreement here on campus,” she adds. “We’ve been taking steps to get to the bargaining table, and that’s still our goal for the future.”