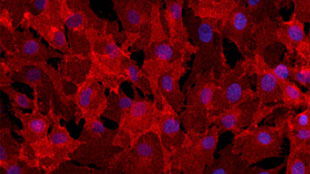 Pericytes, Image courtesy of M. Karow et al., 2012Making new neurons in the brain may not be as hard as once believed. Using just two proteins and without any cell divisions, scientists from Ludwig-Maximilians University Munich succeeded in reprogramming brain cells known as pericytes into neurons in both cultured cells from humans and mice. The findings, published today (October 4) in Cell Stem Cell, could have implications for patients with degenerative brain disorders.

“We are not there yet, but the hope is that we can eventually treat neurodegenerative diseases like Parkinson’s by in situ reprogramming,” said Ludwig-Maximilians’ Benedikt Berninger, lead author on the study.

Since 2011, other scientists including Marius Wernig, a stem cell biologist from the Stanford School of Medicine, have transformed skin cells directly into neurons using three or four proteins. But the conversion was performed in vitro, and such cells would still have...

“It is an exciting paper,” said Wernig. “This kind of treatment would be much easier because no cell transplantation would be involved.” A similar approach was recently shown to work in the hearts of living mice, as researchers were able to transform scar tissue into beating muscle cells, proving that such an in vivo conversion approach may be feasible.

To see if the brain would also lend itself to such manipulation, postdoc Marisa Karow and graduate student Rodrigo Sanchez collected 30 samples of brain tissue from areas that had been removed from patients undergoing surgery for epilepsy. They created cell cultures from these samples, and found that they were rich in pericytes. “Pericytes are very exciting cells, the biology of which is only now being uncovered,” said Berninger. They help to control the flow of blood in the brain, and they build and maintain the blood-brain barrier.

Karow and Sanchez converted human pericytes into neurons using viruses to smuggle in two transcription factors—Mash1, which has also been used to transform skin cells into neurons, and Sox2, which has been used in mice to transform other brain cells called astroglia into neurons. Within 4 to 5 weeks, many of the pericytes successfully reprogrammed into neurons: around half of them contained beta-III-tubulin, a protein found only in neurons, and more than 25 percent had taken on a uniquely neuronal shape. The researchers even filmed these transformations using time-lapse video microscopes.

The same technique worked in mouse cells, and even more efficiently. The newborn neurons took on the right shape, fired off electrical impulses, integrated into existing networks in culture, and seemed to produce the neurotransmitter GABA.

Berninger said that he still does not understand precisely how the reprogramming works. “We believe that Mash1 and Sox2 superimpose a neuronal program onto a cell that has another program running,” he said, “but we are keen to understand the exact mechanisms.”

He also wants to make the technique more efficient. In the cultured human cells, more than 36 percent of the reprogrammed cells died, compared to just 3 percent of untouched ones. Furthermore, changing fates can be catastrophic for the pericytes, and some of the cells that did reprogram didn’t survive. In the end, just 19 percent of the pericytes converted to healthy neurons—too low an efficiency for clinical use.

By finding out how the reprogramming works, Berninger hopes to better understand why it fails in so many cells. “Ultimately, we would like to replace the transcription factors by small molecules that would do the same job,” he said.