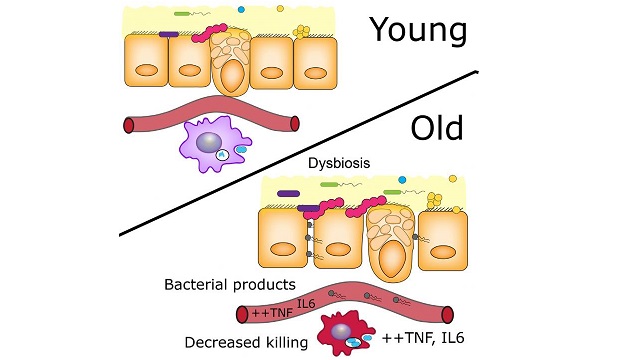 The study “helps us better understand the cause and effect relationships between age-related changes in the microbiota and the health of the aging host organism,” said David Walker of the University of California, Los Angeles, who did not participate in the work. “It’s well established that as all organisms age, there’s an increase in inflammation, but the underlying...

“If you have higher-than-average inflammation in your blood, then you are more likely to die early, to be less healthy, to be less active, to be more frail, and to have chronic inflammatory diseases,” coauthor Dawn Bowdish of McMaster University in Hamilton, Ontario, told The Scientist. “If we could hypothetically reduce this age-associated inflammation, then we would presumably be able to give people longer, healthier lives.”

Bowdish and colleagues found that macrophages from older mice were less able to kill bacteria than those from younger mice, and that older mice have higher levels of pro-inflammatory cytokines in their tissues and circulation than younger mice. These changes are due to increased levels of the inflammatory signaling protein tumor necrosis factor (TNF) in the older mice, the team showed.

The researchers found that, as mice age, the rodents’ intestines become more permeable, which leads to an increase in bacterial products in their bloodstreams. They observed that germ-free mice have longer life spans than conventionally raised mice. And macrophages from older, germ-free mice were as good at killing bacteria as macrophages from younger mice. Additionally, older, germ-free mice had less-permeable intestines and lower levels of circulating inflammatory cytokines than their conventionally raised counterparts, the team reported.

Bowdish and colleagues also demonstrated that TNF knockout mice do not experience the same age-related increases in intestinal permeability and circulating bacterial products that wild-type mice do. Aging produces fewer alterations in gut microbiota in TNF knockout mice, the authors noted. Finally, treating older, wild-type mice with an anti-TNF drug led these animals to have microbiomes that more closely resemble those of younger mice than those of older control mice. These data suggest that there is a reciprocal relationship between TNF levels and microbiota composition.

“This [study] constitutes some groundbreaking research in terms of our ability to understand the relationship between the gut microbiome and aging and the physiological implications of that relationship,” said Thomas Sharpton of Oregon State University in Corvallis, who was not involved in the work. “Going forward, it would be interesting to understand whether or not the observations made in this mouse model translate into humans,” he added.

“Figuring out the mechanisms in more detail is really interesting,” Morgan Langille of Dalhousie University in Halifax, Nova Scotia, who did not participate in the study, told The Scientist. Exploring how TNF affects the gut microbiota and whether it is the primary driver of microbial changes, in addition to investigating the ways in which microbes alter gut permeability and what species are involved, are all open questions, he said.

Bowdish said she envisions the work as a first step toward potential clinical applications. “We think there’s a lot of potential for either identifying better probiotics that directly affect the gut permeability or by manipulating the microbiota into a healthier, less inflammatory microbiota.”