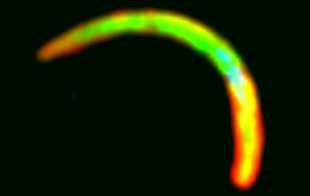 Up to 5 percent of the antibodies circulating in the blood of healthy adults are directed against the carbohydrate antigen Galα1-3Galb1-4GlcNAc-R, also known as α-gal. This molecule decorates the surfaces of many human-associated bacteria, as well as protozoan pathogens, and antibodies against it are cytotoxic to these microbes in vitro.

Now, scientists at the Instituto Gulbenkian de Ciência in Portugal and their colleagues have established an in vivo role for anti-α-gal antibodies in protecting mice against malaria infection. A team led by Bahtiyar Yilmaz and Miguel Soares has now shown that E. coli bacteria colonizing the guts of mice elicit the production of anti-α-gal antibodies. High levels of anti-α-gal antibodies are also linked to malaria resistance in humans, the researchers noted today (December 4) in Cell.

This resistance, according to Soares, was made possible by mutations that occurred in an ancestor of apes and humans. These mutations inactivated an enzyme required for α-gal synthesis and thus blocked anti-α-gal antibodies from attacking human cells. Pigs, however, do produce α-gal, which poses a major problem for transplanting their organs into humans—a former focus of Soares’s research.

His work on organ rejection led Soares to wonder: “Why do we express such high levels of this antibody? And why was this triple mutation selected so stringently in an ancestral hominid?”

“Infectious diseases are one of the major driving forces in natural selection, and therefore in evolution,” he said.

A study of hundreds of people in Mali, where malaria is endemic, hinted at a connection between these antibodies and disease resistance. An analysis of data collected by Soares’s colleagues at the US National Institute of Allergy and Infectious Diseases revealed that high levels of circulating anti-α-gal antibodies were correlated with a lower risk of contracting malaria.

To investigate the mechanisms behind this immunity, the researchers turned to a mouse model. Mice, like pigs, naturally produce α-gal. Therefore, Soares and his team used mice lacking an α-gal-producing enzyme. First, to test the role of gut microbes in anti--gal antibody production, the researchers fed an α-gal-expressing E. coli strain, O86:B7, to germ-free mice and antibiotic-treated mice.

Mice colonized by O86:B7 had up to 100-fold higher levels of anti-α-gal antibodies compared to mice fed with a control strain that did not produce α-gal. The researchers exposed these mice to mosquitoes carrying Plasmodium berghei—a close relative of P. falciparum, which causes malaria in humans. Mice with gut flora-induced antibodies were about half as likely to become infected with the parasite.

Experiments in knockout mice that cannot produce IgM antibodies, which are active at early stages of infection, demonstrated that this protective effect depended on IgM antibodies. Mice immunized with a synthetic form of α-gal, however, were protected more effectively than those colonized by O86:B7. This protection involved specific classes of IgG antibodies, which are produced at later stages; the passive transfer of these antibodies also shielded mice from malaria infection.

Such immunity, the researchers showed, requires the activation of complement, a set of signaling proteins that recruits neutrophils to attack and kill invading pathogens. The approach used to immunize mice in this study will guide the development of a human vaccine, which is especially needed for young children, who produce lower amounts of anti-α-gal antibodies and are more susceptible to malaria than adults.

“It’s harder for children to mount reactions against carbohydrate antigens for some reason,” said Ajit Varki of the University of California, San Diego, who studies another non-human carbohydrate, the Neu5Gc form of sialic acid. Varki said he thinks that boosting α-gal reactivity in humans by immunization is promising but “could be a bit of a challenge” in practice.

Soares noted that the latest clinical trial results from an experimental malaria vaccine that targets a protein epitope of the parasite were “very disappointing.” He is hopeful that his group’s findings can be applied to improve vaccine development: “We think that by putting α-gal together with this type of protocol, we can increase by 10- to 100-fold the potency of this vaccination protocol,” he said. “That remains to be tested . . . but what a wonderful thing, if this was true.”

Correction (December 4): This article has been updated to reflect that the Neu5Gc form of sialic acid is a non-human carbohydrate.