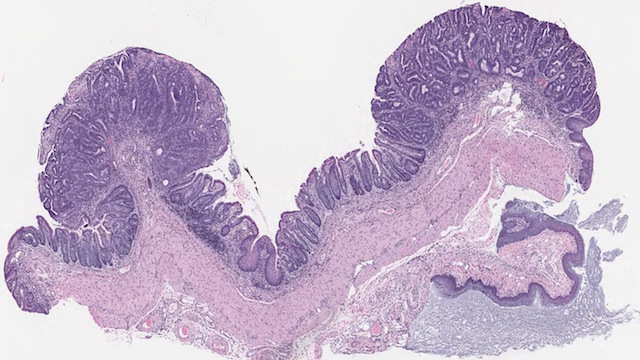 In recent years, scientists have developed organoids, stem-cell-derived organs-in-a-dish, for a number of tissues, including kidneys, guts, and brains. While these mini-organs provide a useful tool to study both development and disease, many researchers still consider animal models necessary to validate the findings made in vitro. In two back-to-back studies published today (May 1) in Nature Biotechnology, scientists combined these two approaches by transplanting organoids into mice to develop a faster, more accurate murine model of colorectal cancer (CRC).

CRC is one of the most common cancers in the Unites States, and the second leading cause of cancer-related deaths in the country. Despite the need for better treatments for this disease, genetically engineered animal models of CRC are still quite limited. 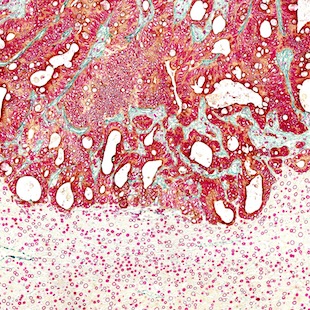 Liver metastasis from human colorectal cancer tissue that was developed into an organoid and transplanted into the colon of a mouseJATIN ROPER, STEFFEN RICKELT

In recent years, researchers have tried to improve these animal models by using mini guts, which were first developed in the lab of Hans Clevers, a professor of molecular genetics at Utrecht University in the Netherlands, in 2009. “Once the culture conditions were established by [Clevers and colleagues] and they demonstrated the ability to do genetic manipulations, it opened the field right up for anyone that wanted to use those systems,” said Lukas Dow, a study coauthor and biochemistry professor at Cornell University.

One group, which included Lowe and Dow, transplanted these organoids into the epithelium of host animals’ colons using non-invasive rectal enemas. To get the organoids to implant into the host colon, the team preconditioned the mice with dextran sodium sulfate, which caused a small injury to the colon, exposing a site for the organoid to engraft.

The other team, led by Omer Yilmaz, a biology professor at the Koch Institute at MIT, used colonoscopies to directly insert organoids into the submucosal layer of the animals’ guts. In both studies, researchers observed the progression of CRC in the host mice—the implanted organoids developed into tumors that, in a subset of animals, eventually metastasized and spread to the liver.

“What’s really powerful about this technique is that the tumors that arise in the recipient mice recapitulate what tumors look like in human cancers,” Yilmaz said. “I think this is the big difference between these approaches and previous approaches.”

Each method has its advantages and disadvantages. The enema technique requires injuring the colon, but creates tumors in the epithelium, which is where human CRCs typically begin. The colonoscopy approach doesn’t damage the colon, but establishes tumors in the submucosal layer, where cancer does not generally arise until later stages of the disease.

“Such shortcomings of each method are complemented by the strengths of the other,” Sato Toshiro of Keio University in Japan who was not involved in the studies wrote in an email. “I believe that these two works will synergistically contribute to unveil mechanisms underlying CRC progression, especially invasion and metastasis.”

This idea of using gut organoid transplantation to model colon cancer has captured the attention of a number of research groups. In fact, in recent months, Clevers’ group—and two others—also published studies reporting similar techniques. “There’s been a whole flurry of these papers,” Clevers told The Scientist. “This only happens when it is a very competitive, rapidly developing field.”