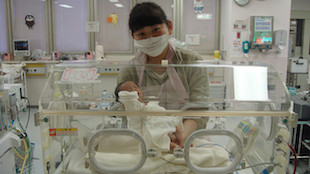 Infants start out mostly microbe-free but quickly acquire gut bacteria, which take root in three successive groups. First, Bacilli dominate. Then Gammaproteobacteria surge, followed by Clostridia. But the pace at which these bacterial groups colonize the gastrointestinal tract depends on the time since the babies were conceived, not since when they were born. And time since conception appears to have more of an influence on the infant gut microbiome than other factors, such as exposure to antibiotics, whether babies were born vaginally or by cesarean section, and if they were breastfed. These are a few of the findings from a survey of 922 fecal samples collected from 58 premature babies, published today (August 11) in PNAS.

“It is an interesting study that provides useful data regarding temporal changes in microbial composition in the infant gut that can be mined further,” Shyamal Peddada, a biostatistician...

“I think the paper does a nice job of showing that premature babies develop differently from full-term babies . . . it is not just a function of colonization after birth,” Rob Knight from the University of Colorado, Boulder, told The Scientist in an e-mail. “Differences in gut physiology or in the infant immune system could explain this pattern.”

Researchers at the Washington University School of Medicine in St. Louis embarked on this survey in an effort to better understand the role of the microbiota in the development of gut disorders common in premature infants, such as necrotizing enterocolitis. Without first defining the premature infant gut in the absence of gastrointestinal issues, the researchers struggled to identify potentially pathogenic bacterial patterns.

The researchers collected stool samples each time the babies defecated until they were thirty days old, and sampled every third elimination after that. They then sequenced 16S ribosomal RNA genes to identify the bacterial composition of each sample.

“We did not think we would need quite so many specimens from quite so many children to establish the norm,” said coauthor Phillip Tarr, a professor of pediatrics and molecular microbiology at Washington University.

Babies are considered full-term at 39 weeks after conception. The infants in this study were all born between 23 weeks and 33 weeks post-conception, and remained in the neonatal intensive care unit (NICU) at St. Louis Children’s Hospital, only leaving briefly on occasion for medical care not available within the NICU. Staff and visitors entering the NICU take precautions not to expose the infants to outside bacteria.

In 85 percent of the fecal samples studied, more than 90 percent of the bacterial sequences belonged to Bacilli, Gammaproteobacteria, or Clostridia. Bacterial communities in each infant often shifted abruptly from sample to sample. Overall, however, bacterial colonization followed a relatively set course. At 25 weeks after conception, aerobic Bacilli made up most of the bacteria in the infant fecal samples. But a few weeks later, Gammaproteobacteria had surpassed the Bacilli. By 33 weeks to 36 weeks after conception, the babies also showed abundant Clostridia, which typically dominate the mature gut.

The researchers recorded whether the babies were born by cesarean section or vaginal delivery, whether they consumed sterilized formula or breastmilk, and whether—and how often—they were given antibiotics. The team found no association between these factors and the order in which the bacterial communities colonized the infant gut; the same factors seemed to have only a relatively small influence on the pace at which the gut microbiota developed.

The results suggest that factors innate to premature infants have more sway in determining the contents of their gut microbiota than environmental influences do, said Tarr. “The child comes in contact with a lot more bacteria than we perceive, and yet the gut is programmed to nurture only a subset.”

“This paper provides the most comprehensive information about the development of the preterm infant gut to date,” said Knight.

Merete Eggesbø, an epidemiologist and physician at the Norwegian Institute of Public Health, pointed out that factors like breastfeeding often do influence the gut microbiota of full-term babies in the microbially diverse outside world. “The babies [in the NICU] are in such a very restricted environment when it comes to microbes that the more subtle changes may be lost,” she said. Seeing the effects of outside factors may require “an arsenal of microbes to pick from,” Eggesbø added.

Peddada said that once the researchers divided the infants into groups based on age and variables like birth route, they were sometimes comparing quite small numbers of infants. This could also help explain why associations between these variables and gut bacteria in the infants were not apparent. “One possible explanation—at least for some variables—is perhaps the small statistical power due to small sample sizes in some groups,” he said.

Tarr and his colleagues will now use their data on premature infants who do not have gut disorders to understand the microbiota of babies who do develop problems.

The researchers also would like to continue to record data on their group of healthy premature infants to understand whether early-life microbes influence health beyond the NICU. “We need to follow these children for years to come to see if this early community is retained and if it has any relationship to later-in-life host wellbeing,” he said.