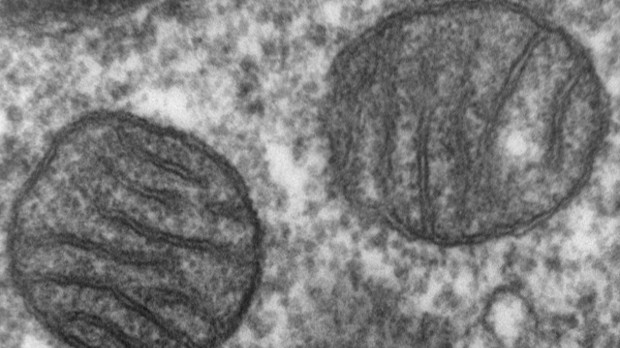 WIKIMEDIA, LOUISA HOWARDMice bred such that their nuclear and mitochondrial DNAs derive from different strains tend to grow old in better health than mice whose mitochondrial and nuclear DNAs are ancestrally matched, according to a study published today (July 6) in Nature. These apparent health benefits occur despite signs of oxidative stress in the mismatched animals, researchers from the Spanish National Center for Cardiac Research in Madrid and their colleagues have found.

“This paper is very exciting because it is putting an emphasis on the impact of the match between mitochondrial DNA and nuclear DNA,” said mitochondrial biologist Orian Shirihai of Boston University who was not involved with the work.

Mitochondria, the energy-producing power stations of cells, have their own small genomes. And, compared with the human nuclear genome, these mitochondrial genomes are highly variable, said José Antonio Enríquez of the Spanish National Center for Cardiac Research, who led...

But growing evidence suggests that normal non-pathogenic mtDNA variations could have more subtle effects on physiology than first thought. Such variations have been suggested to reflect mitochondrial and metabolic adaptations to different climates, for example. And in cells, mitochondria from different strains of mice have indeed been shown to exhibit different metabolic outputs. Enríquez and colleagues have now examined whether such mitochondrial strain differences affect whole animals.

Because mitochondria are only inherited maternally, the team crossbred female mice of the strain NZB/OlaHsd with male mice of the strain C57BL/6. For 20 generations, the researchers mated the resulting female offspring with C57BL/6 males, essentially diluting the nuclear DNA from the NZB/OlaHsd strain until it was practically non-existent. The resulting “conplastic” mice thus had mtDNA from NZB/OlaHsd, but nuclear DNA from C57BL/6.

“We were surprised that the foreign DNA made the animals look healthier and age healthier,” said Enríquez.

And there were more surprises. The healthier disposition of the conplastic animals was—counterintuitively—associated with increased levels of potentially damaging reactive oxygen species (ROS), at least in young animals.

“What they are seeing in the mismatched cases is basically an increase in oxidative stress,” said evolutionary biochemist Nick Lane of University College London who did not participate in the study. “And that appears to be having generally a beneficial effect on health.”

One possible explanation, said Lane, is that because the mitochondrial enzyme complexes contain subunits encoded by both nuclear and mitochondrial genes, when the two genomes are mismatched these complexes may not function quite as efficiently, which would result in a mild stress response. And, he continued, “a mild stress response, as long as it’s not too much, might be good for your overall health.”

It is the phenomenon of hormesis, said Enríquez—where a little bit of bad can be good.

Indeed, as the animals aged, the ROS production remained relatively steady in the conplastic animals, but ramped up sharply in the C57BL/6 mice—a further indication of the healthier aging of the mismatched animals.

Mitochondrial replacement therapy, a technique approved for use in the U.K., can prevent the transfer of potentially harmful mtDNA mutations from a mother to her offspring. If the mother and the donor of the mitochondria are genetically distant, the resulting baby might have a mitochondrial-nuclear DNA mismatch much like that of the mice in the current study, the authors noted.

Given that the new work indicates pronounced effects on health caused by such mismatching, albeit beneficial ones, “the recommendation is to try to use a [mitochondria donor] that is closer to the recipient,” Enríquez said. “Because there is a functional impact of the mitochondrial DNA, this simply needs to be studied.”