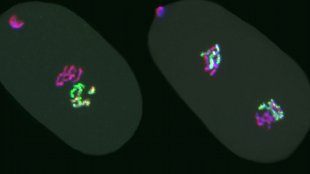 C. elegans cells showing H3K27me labellingLAURA GAYDOSAfter DNA replication and division, cells generally remember which of their genes should be active and which repressed—but how? A study in worms published today (September 18) in Science reveals that part of the mechanism involves divvying up modified histones—molecular tags that label active or repressed genes—between daughter chromosomes at replication. Researchers from the University of California, Santa Cruz and Indiana University, Bloomington, found that although the tags in each chromosome are reduced as a result of division, subsequent recruitment of histone-modifying enzymes reestablishes the full tag quota, thus preserving the memory of modifications for the next round of division.

“They show very elegantly using their system that modified histones can be inherited through multiple rounds of cell division and can be passed on . . . to the next generation,” said Shiv Grewal, an epigenetics and chromatin researcher at the...

Histones, the proteins around which DNA is wrapped to form chromatin, can be modified by the addition a various moieties. And such modifications are thought to represent—and even influence—the transcriptional activity of associated genes. Although the presence of these modifications at given genomic locations can be inherited from a parent cell to its daughters, exactly how this landscape of histone modifications is reestablished after DNA replication—when the histones are temporarily evicted from DNA—was unclear.

“There’s been a lot of debate about whether histone modifications can be heritable,” said Bill Kelly, a biologist at Emory University in Atlanta, Georgia, who was not involved in the study. “When you replicate the DNA you have to replicate the histones . . . and de novo synthesized histones don’t have marks put there by transcription or repression,” he explained.

Luckily, said Strome, she and her colleagues “were in a position to directly test those two models.” Her team generated Caenorhabditis elegans eggs that lacked an enzyme called Polycomb repressive complex 2 (PRC2), a histone-modifying enzyme that methylates lysine 27 of histone H3 (H3K27me)—a mark associated with transcriptional repression. Fusing these roundworm eggs with wild-type sperm resulted in a single-celled embryo with one set of chromosomes (paternal) dusted with H3K27me marks, and another (maternal) that was not. Because the sperm cannot contribute PRC2 itself, the embryos lacked the enzyme altogether, allowing Strome and colleagues to clearly visualize the fate of the existing H3K27me marks.

With each cell division the H3K27me marks became dimmer until, by approximately the 48-cell stage, they were “below the detection of the microscope,” said Strome. But, importantly, what the researchers could see was that, “histone modifications are indeed passed to the daughter chromosomes—the chromosomes derived from the initial sperm chromosomes—and the oocyte chromosomes, which did not have the mark to begin with, do not acquire it,” she added.

The team then performed a reverse experiment in which the male chromosomes were unmarked and the oocytes contained both H3K27me marks and PRC2. This time the signal did not become dimmer with each division, because PRC2 was able to reestablish the mark. But, said Strome, “what was really remarkable for us to see was that, even with active enzyme, the H3K27me marking was restricted to the parent-of-origin chromosome.” This ability to recreate marks only at their original chromosome locations was, said Strome, “the hallmark of memory.”

According to Kelly, the results suggest “that after replication there is sufficient information there that it can be targeted by the maintenance system”—the histone-modifying enzymes. Indeed, the mammalian PRC2 is capable of both binding to H3K27me as well as creating the mark, explained Strome.

The findings have implications not only for cellular inheritance of epigenetic marks but also transgenerational inheritance, which “a lot of people suspect,” said Grewal, but for which “there is not much evidence.” Indeed, added Strome: “We’re starting to get a molecular handle on what it means to pass epigenetic information from parent to child—both at the organism and cell level—and our work provides a little window into that.”