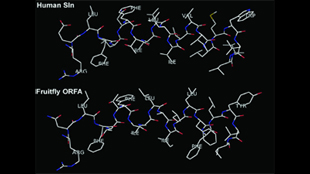 Human sarcolipin (top) and fruit fly sarcolamban (bottom) proteins MAGNY ET AL, 2013The regular heartbeats of humans and fruit flies both depend on tiny genes that have gone unnoticed because of their small size. They encode proteins with just 30 amino acids or fewer, and belong to an enigmatic group of sequences called small open reading frames (smORFs).

The human genome contains thousands of smORFs but their size makes them hard to identify and characterize. With a few exceptions, no one knows what they do. But by showing that the homologous smORFs control human and fly hearts—a role retained over 550 million years of evolution—Juan Pablo Couso from the University of Sussex has made a compelling case that these tiny genes are important players that deserve more attention. His study is published today (22 August) in Science.

“There could be thousands of these things that need to...

Most human proteins are around 500 amino acids long, while smORFs, by definition, encode proteins with 100 amino acids or fewer. Using traditional methods, these mini-genes are hard to distinguish from random sequences. “These things have fallen through the cracks of traditional gene-finding algorithms, and most of the ones we know about have been serendipitously discovered,” said Alan Saghatelian, a physiologist at Harvard University, who was not involved in this study.

For example, in 2003, Couso noticed that one of his fruit flies was missing most of its legs. He and others later showed that this deformity is caused by a mutation in tarsal-less, a gene that produces a miniscule peptide of just 11 amino acids. However, tarsal-less is unique to insects and some crustaceans, so the wider relevance of such smORFs remained unclear. “The big thing about our new paper is that we’ve found another smORF in flies that’s also conserved in humans and other animals,” says Couso.

Tarsal-less was originally described as a long noncoding RNA (lncRNA)—sequences that may help to control other genes but are supposedly never translated into proteins. By studying similar lncRNAs in fruit flies, Emile Magny, a student in Couso’s lab, identified two more smORFs, made up of 28 and 29 amino acids, respectively. Both were found within a gene called pncr003:2L, which the team later renamed sarcolamban.

Sarcolamban is activated in muscles including heart. When Magny deleted it, the flies’ hearts were more likely to beat erratically—a defect he could fix by adding back the peptide encoded by either smORF.

Within the heart, sarcolamban is active in the sarcoplasmic reticulum—a structure that responds to electrical signals from neurons by releasing a flood of calcium, which makes muscle cells contract. Without sarcolamban, these calcium spikes become larger and briefer, leading to irregular contractions.

The team found that humans have counterparts to sarcolamban­—two 30-amino acid proteins called sarcolipin and phospholamban. These also control the movement of calcium in the sarcoplasmic reticulum, and sarcolipin has even been linked to human heart arrhythmias in previous studies. “This gene was well known through clinical research because of its association with arrhythmia, but no one made a fuss of the fact that it was a smORF,” says Couso.

These smORFs all derived from a single ancestral gene and still seem to play the same roles in heart control, despite 550 million years of evolutionary separation. The team confirmed this by showing that human and fly smORFs can stand in for one another. Human sarcolipin and phospholamban will home to the right part of a fly’s cells and partially correct the arrhythmic defects caused by a loss of sarcolamban.

This could be the tip of the iceberg. Several groups have found thousands of smORFs by systematically searching various genomes, but their roles are unclear. “We essentially said they’re there, but we don’t know if they’re functional,” said Saghatelian. “The new work suggests that these elements are not only unknown but also biologically interesting.”

Couso suspects that around a fifth of lncRNAs actually contain smORFs that are used to make proteins. “We don’t know what answers to what problems could be found in this pool of new genes,” he said.