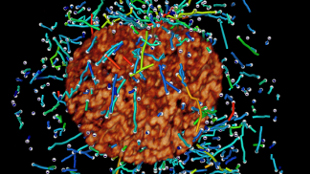 Every imaging technique has its drawbacks. Even the super-resolution microscopy that earned Eric Betzig and his colleagues the Nobel Prize in Chemistry earlier this month requires a tradeoff between detail and speed. Measurements that produce single-molecule resolution take time, and eventually, light exposure can bleach fluorescent molecules and damage living cells.

To overcome these problems, Betzig and his team at the Howard Hughes Medical Institute’s Janelia Research Campus in Ashburn, Virginia, developed “lattice light-sheet microscopy,” which illuminates one thin section of living sample at a time using a targeted plane of light. The new technology, reported today (October 23) in Science, minimizes light damage and photobleaching, and is nimble enough to track the movements of single molecules in three dimensions over time.

“Plane illumination is taking the light from the side in a plane that’s coincident with the focal plane, and then you only illuminate the area you care about—the area with the high-resolution information, and you don’t do any damage or toxicity to the rest,” Betzig explained. He said he was inspired by imaging researcher Ernst Stelzer, who first “resurrected” the century-old concept of plane illumination microscopy. “The best ideas are simple ideas, and I thought that was a beautiful, simple idea,” said Betzig.

Cell biologist Tomas Kirchhausen and his colleagues built their own lattice light-sheet microscope with help from Betzig’s team, and are now experimenting with the technology in their laboratory at Harvard Medical School. Kirchhausen’s research focuses on the process of endocytosis—the mechanism by which viruses, cholesterol, and other molecules are taken up into cells. The instrument’s single-molecule resolution and the ability to take images at 2-millisecond intervals are “just stunning,” said Kirchhausen.

Last year, 30 different research groups visited Betzig’s lab and used the new microscope to view a wide variety of biological specimens. They watched the shuffling of endoplasmic reticulum and mitochondrial components in dividing pig kidney cells, the real-time formation of “immunological synapses” between cytotoxic T cells and their targets, and the oscillations of epithelial cells during dorsal closure in developing Drosophila embryos, among other things.

“With this microscope, I feel like Galileo,” said Betzig. “No matter where we point it, we make a discovery, and we see something of incredible beauty.”

Betzig acknowledged, however, that the technology has limitations. Among them: it’s not well suited to seeing details through the full depth of a larger sample.

Pavel Tomancak, a developmental biologist at the Max Planck Institute of Molecular Cell Biology and Genetics in Germany, uses a related technique—selective plane illumination microscopy (SPIM)—to study gene expression patterns in developing fruit fly embryos, often over a period of days. Although he is excited by the “insights into how dynamic biological processes happen” enabled by the new lattice light-sheet approach, he said its imaging capabilities are still limited to the surface of complex, multicellular specimens.

Betzig’s team is already working to overcome this obstacle. Said Tomancak: “His [Betzig’s] goal is to use . . . adaptive optics to allow even imaging of larger samples with this kind of microscope, which would be amazing.”