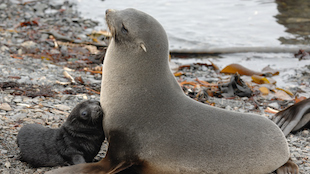 A female Antarctic fur seal with her newborn pupJAUME FORCADAThe influence of climate change is already apparent in the genomes of Antarctic fur seals (Arctocephalus gazella) living in the southern Atlantic Ocean, according to a study published today (July 23) in Nature. Female seals with high heterozygosity—genetic variation between chromosome pairs—are more likely to join the breeding pool and to breed successfully than are more genetically homogeneous females. These traits are tied to the fluctuating supplies of the tiny krill that the seals eat. But they will not protect the animals as the climate continues to change, as they are not heritable, researchers report. Heterozygosity in breeding females has increased even as the fur seal population and birth weight have declined.

Ecological geneticist Ary Hoffmann of the University of Melbourne in Australia noted that previous work has shown that heterozygous animals typically have an advantage,...

“Not many studies have analyzed the consequences of ongoing climate change on patterns of genetic variability, and I think that this study constitutes an unprecedented contribution [in] this respect,” Joaquín Ortego, an evolutionary biologist at the Doñana Biological Station in Spain, wrote in an e-mail to The Scientist.

Researchers have been monitoring fur seals on the island of South Georgia for more than 30 years. Antarctic fur seals nearly went extinct in 19th century when hunters killed many for their fur. The population rebounded since then, but now seems to be falling again. The number of breeding female seals since the1980s has fallen by around one-quarter.

This observed decline in breeding female seals goes hand in hand with climate conditions, researchers have found. Since the 1990s, the Southern Annular Mode (SAM), a climatic pattern in the southern hemisphere, has been changing in ways that reduce the population of the krill that the seals eat.

As food availability-related stress has grown over the years, the birth weight of female pups has decreased. Meanwhile, the weight and age of breeding females grew compared to females that never made it into the breeding population.

A pair of investigators at the University of Bielefeld in Germany and the British Antarctic Survey measured heterozygosity in female seals by sequencing nine bits of repeating DNA called microsatellites. To validate the ability of the markers to represent variability more generally, the researchers also looked at 101 additional markers—single nucleotide polymorphisms (SNPs)—in some of the animals.

They found that, especially in years when climate was poor and krill were scarce, only the most heterozygous females entered the breeding population. The females with little internal genetic diversity were more likely to die before reaching breeding age.

“As the climate has gotten progressively worse, locally reducing food availability, then selection has gotten stronger and stronger on the seals,” said study coauthor Joseph Hoffman, a population geneticist at Bielefeld.

While heterozygosity seems to make females more resilient, they do not transmit this trait to their pups. “The sad thing, in a sense, is that these females that are really fit are not going to pass on their increased fitness to their offspring,” Ary Hoffmann noted.

The researchers do not have a full understanding of exactly why heterozygosity seems to give the female breeding seals such an advantage. The likeliest explanation is that heterozygosity is a sign of reduced inbreeding. Genetic variety has long been shown to help other animals to respond to unexpected or variable conditions.

Hoffman said that his team next plans to sequence many more markers throughout the seal genomes, in order to pinpoint where heterozygosity seems most important. He speculated that heterozygosity may be especially important in genome regions encoding pathogen recognition molecules like the major histocompatibility complex, which helps recognize a diverse set of threats.

The authors speculated that the selection for heterozygous female seals may allow the seals to maintain genetic diversity population-wide, even as their overall numbers fall. Genetic diversity makes it more likely that populations will be able to respond to changing conditions.

Still, this continued genetic diversity will only buy the fur seals time to adapt to current climate change, the researchers said. Without heritable genetic changes that allow the seals to cope with their altered world, the population will continue to decline.

“Heterozygote breeding advantage is buffering the expected loss of genetic diversity,” said Ortego. “This can help to maintain the evolutionary potential of the species and ensure population viability in the short-medium term at least, until the demographic decline reduces census size below a threshold that makes the population to go inevitably extinct.”