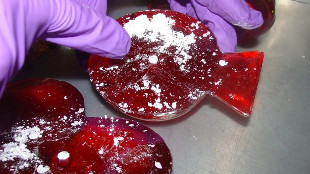 FLICKR, UKHOMEOFFICEA protein involved in HIV transcription enhances the rewarding effect of cocaine and causes mice to become even more hyperactive when they're on the drug, researchers report today (August 15) in Neuropsychopharmacology. The findings could help explain why people infected with HIV and who use drugs tend to suffer more neurological and cognitive decline than people who don't have the disease or don't abuse substances.

The link between HIV, drug abuse, and cognitive decline has “been observed epidemiologically for some time, but the mechanisms of how that interaction might occur have really been very elusive,” said Rosemarie Booze, a professor at the University of South Carolina, who was not part of the study. “I think this paper sheds important information in terms of identifying how those drugs and HIV might interact and affect brain function.”

The ways in which HIV itself might affect drug use have...

To see how the protein might alter the effects of a stimulant, McLaughlin and his colleagues gave cocaine to transgenic mice whose astrocytes expressed Tat when the animals were given doxycycline, as well as mice who lacked the Tat gene altogether. Other control mice had the Tat gene, but did not have its expression induced by doxycycline.

All of the mice became hyperactive after the cocaine, but the researchers found that those with Tat expressed ran around much more than mice without the protein. “We interpret that as demonstrating that Tat protein is increasing the effects of cocaine,” McLaughlin told The Scientist.

All mice given cocaine also showed a preference for the chamber where the drug was administered by spending more time there. Mice with Tat protein in their brains, however, spent 3- to 5-times as long in the cocaine chamber compared with the other mice. McLaughlin’s team could then extinguish this preference over time, and the mice both with or without Tat would no longer spend more time in any given chamber. But once Tat was induced again—in the absence of cocaine—the mice reinstated their preference for the chamber where the drug had been given weeks earlier. “The conclusion we're drawing from that experiment was exposure to Tat protein may increase vulnerability not only to the rewarding effects of drugs of abuse, but could increase vulnerability to relapse,” McLaughlin said.

The mechanisms to explain these heightened responses to cocaine are unclear. Tat “is probably affecting the dopamine neurons in the brain,” Booze told The Scientist. “Those are thought to underlie many rewarding actions.” Tat, she added, “probably has a direct affect on the dopamine transporter system . . . whereby cocaine and Tat protein facilitate each other’s actions,” though this has yet to be demonstrated, she noted.

“This is a very important study in the field as it elegantly demonstrates how HIV Tat potentiates the addictive effects of cocaine in mice,” said Shilpa Buch, a professor at the University of Nebraska Medical Center, in an email to The Scientist. “This study also has clinical ramifications as it sheds light on the ability of HIV Tat to increase the possibility of relapse in abstinent subjects with a history of cocaine abuse.” She added that it will be important to next test how this animal model of Tat exposure behaves during studies in which the drug is self-administered.

Tat is a particularly insidious component of HIV infection and is known to be neurotoxic. In humans, the protein persists even despite undetectable viral loads resulting from anti-retroviral therapy. There's suspicion that Tat is involved in the neurologic damage that can go along with HIV infection, called neuroAIDS, even after the virus is essentially knocked down.

“It's a serious problem. We can knock the viral content down to immeasurable levels, but it's still having an influence on the well being of infected patients,” McLaughlin said. He added that some groups are working to develop drugs that could somehow block Tat, or even use it as a vehicle for good, by piggybacking on its ability to travel between cells.