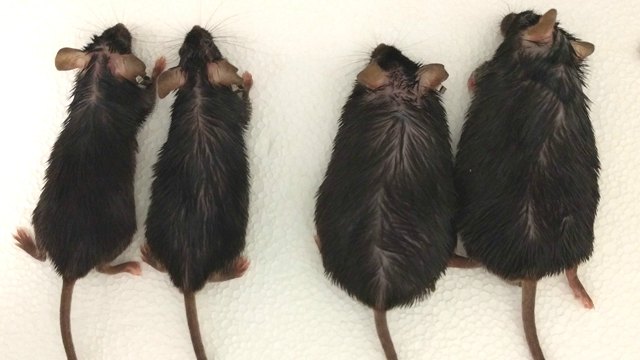 Two very lean mice heterozygous for a mutation in FBN1 found in a patient with neonatal progeroid syndrome (left), with two wild-type mice (right). All four mice have been fed a high fat diet for three months.NATURE MEDICINE, 2017, C. DUERRSCHMID ET AL.Two people with a rare genetic disorder have helped shed light on the fundamental neuroscience of appetite and, scientists say, opened up a new target for potential obesity treatments. Neonatal progeroid syndrome (NPS) affects only a handful of people worldwide. The most telling features of the condition are an aged appearance due to an absence of the fat layer under the skin and extreme thinness.

Researchers report in in Nature Medicine today (November 6) that a glucose-releasing hormone involved in the disease crosses the blood-brain barrier and homes in on neurons that regulate appetite in mice. The study suggests it might be possible to target...

“Rare diseases with extreme phenotypes like this are very valuable to learn important things that then apply to more common diseases,” says coauthor and medical geneticist Atul Chopra of Baylor College of Medicine in Houston, Texas.

It’s fascinating to find something that appears to be a major new hormone in energy homeostasis from studying patients first, rather than mouse models.—Roger Cone,
University of Michigan

Chopra and colleagues showed in a previous study that patients with NPS have mutations near the end of a gene called FBN1, which encodes profibrillin. It was already known that profibrillin is processed to form fibrillin 1, an extracellular matrix protein. The 140-amino-acid chunk cleaved from the end of profibrillin, which Chopra’s group named asprosin, is secreted by adipose tissue and functions as a hormone that causes the liver to make glucose. They determined that two individuals with NPS are heterozygous for FBN1 mutations and have greatly reduced levels of circulating asprosin.

In the current study, Chopra’s team found that the same two people with NPS have overall lower levels of food intake and energy expenditure compared to people of the same age and sex. To test the hypothesis that asprosin regulates appetite and is responsible for the extreme leanness among NPS patients, the researchers generated a mouse model heterozygous for a mutation that truncates FBN1 and is identical to one found in another NPS patient.

Strikingly, the NPS mice were very lean, had less than half the circulating asprosin as their wild-type counterparts, and showed comparable decreases in food intake and energy expenditure to patients with NPS. When fed a high-fat diet for six months, the NPS mice were resistant to the obesity and glucose intolerance developed in wild-type mice under the same conditions.

In a complementary experiment, the authors showed that injection of an antibody that binds to and inactivates asprosin decreased feeding and reduced body weight in obese mice, which have higher than normal levels of circulating asprosin, as do obese people.

“It’s a story that began with just two patients,” says Chopra. “In the first paper, we showed that asprosin neutralization acutely reduced glucose levels and insulin levels in diabetic mice. In [this] paper, we have shown that it also reduces appetite and makes obese mice thinner over time.”

The activity of one group of neurons that stimulates appetite, called agouti-related neuropeptide positive or AgRP+ neurons, was low in NPS mice, but injection of asprosin rescued this phenotype and raised food intake to wild-type levels. The researchers showed that asprosin crosses the blood brain barrier, where it increases firing rates for AgRP+ neurons, and then downstream of this activation, decreases the firing frequency of pro-opiomelanocortin (POMC)-positive neurons, which suppress appetite. In mice without AgRP+ neurons, asprosin does not stimulate food intake, except when the mice are fed a high fat diet, suggesting that these neurons are necessary for the hormone’s effects on eating regular food.

“It’s fascinating to find something that appears to be a major new hormone in energy homeostasis from studying patients first, rather than mouse models,” says Roger Cone, a neuroscientist who investigates the role of neural circuits in obesity and feeding at the University of Michigan and did not participate in the work. It will be important for other labs to reproduce these findings, he says.

According to Cone, one open question includes how asprosin production is regulated, given that fibrillin-1 is present in many places in the body in addition to adipose tissue. Another is why AgRP+ neurons do not seem to be necessary for asprosin response when mice eat high-fat food. “Energy homeostasis is really complicated and we still have a lot to learn,” he adds.

“It’s interesting to see a new molecule coming from the adipose tissue that acts both centrally [in the brain] and on the liver to regulate glucose production,” says Serge Luquet, a neuroscientist who studies feeding behavior at the French National Center for Scientific Research in Paris and was not involved in the study. He explains that these may not be the only mechanisms by which asprosin functions, but are nevertheless important to study. “The next question is, can we apply [these findings] to actually develop new molecules that have the potential to help people [with] feeding and metabolic disease?”

Chopra agrees that taking the team’s findings back to the clinic is an important future direction. His team has plans to try giving NPS patients asprosin, as the mouse results indicate that the hormone could stimulate appetite in people, too. And on the other end of the spectrum, treating obesity and diabetes, “asprosin neutralization seems to work well in mice, [but] lots of work remains to be done,” he says, especially before moving into humans. “I’m pretty excited to see where this goes.”

Correction (November 6): We mistakenly stated that people with NPS typically die in infancy, which is not the case. The Scientist regrets the error.